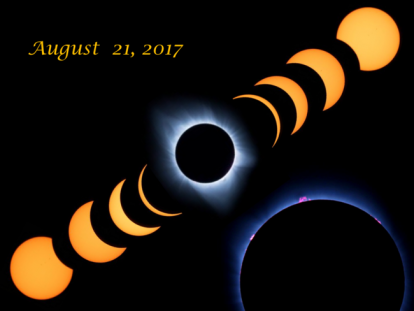 The above collage of images captured by William Gutsch, Ph.D. ’67, distinguished professor in the College of Arts and Sciences, shows a composite of the various phases of the eclipse including the moment of totality when the dark disk of the moon transformed the sun into looking like a black hole in the sky surrounded by the pearly glow of the sun’s atmosphere, known as the corona. It is only during a total eclipse that astronomers are able see and study the sun’s atmosphere which spreads out across the solar system and engulfs all the planets including the Earth.