Documentary showing “Joachim Prinz: I Shall Not Be Silent” & conversation with filmmaker, Dr. Rachel Fisher

On Thursday, October 8, 2020 at 3pm the History Department, the Center for Holocaust and Genocide Studies, and the Dean of the College of Arts & Sciences present the documentary Joachim Prinz: I Shall Not Be Silent.

The film tells the story of Rabbi Joachim Prinz, who was expelled from Germany in 1937 after multiple arrests for preaching against Nazism and for promoting the values of Judaism. After emigrating, Prinz became rabbi of Temple B’nai Abraham in Newark, NJ and later President of the American Jewish Congress. He became a leader of the civil rights movement after witnessing the racism against African Americans in his new home and realizing America’s democracy was also filled with prejudice and bigotry. Prinz worked to organize the 1963 March on Washington for Jobs and Freedom, declaring, “bigotry and hatred are not the most urgent problem. The most urgent, the most disgraceful, the most shameful and the most tragic problem is silence.” Moments later, Martin Luther King, Jr. delivered his “I Have A Dream” speech.

Following the film, Assistant Professor of  History, Dr. John Johnson, Jr., a Newark, NJ native and scholar of race, class, culture, and urban geography in the 20th century United States will lead a discussion with one of the filmmakers, Dr. Rachel Fisher.

The film showing and discussion are virtual and free to the university community, but you must register to receive a participation link. 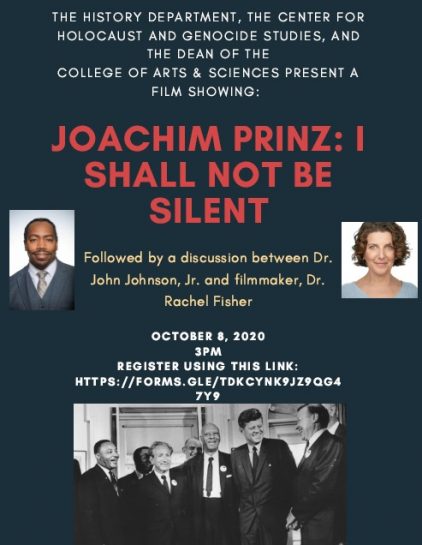