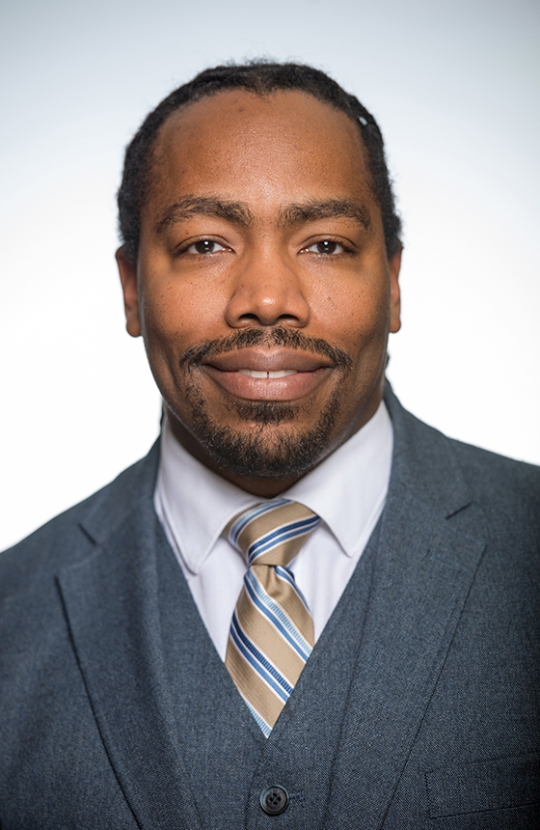 John Wesley Johnson, Jr., is an assistant professor of history at Saint Peter’s University. John earned his master’s in history and a Ph.D. in American Studies from Rutgers University-Newark. His research centers on race, class, culture, and urban geography in the 20th century United States. John is presently writing a book length manuscript on the long history of the storied Weequahic Section of Newark. This study documents the community’s emergence from a collection of farms on the periphery of industrial Newark, and charts its transition from a predominantly Jewish to a majority African American neighborhood in the 1960s. The work considers the larger impact of federally funded urban renewal on the city at large, looking closely at how highway construction and downtown development impacted the lives of Newark residents.

Before joining Saint Peter’s, John was a fellow at the Clement A. Price Institute on Ethnicity, Culture, and the Modern Experience, where he helped developed and coordinate a number of public history projects. In 2015, he served as the Executive Director of Newark Celebration 350, which was a yearlong commemorative celebration of the people, history, and culture of Newark. More

A seasoned educator, John has taught for over two decades, instructing students from middle school to college. He has also served as a middle school administrator, higher education program coordinator, and a residential education director and counselor. John is particularly invested in serving first-generation college students, as he has over a decade of experience working with pre-college and undergraduate educational programs as an instructor and administrator.

In his personal life, John and his wife Lauren are raising their newborn twins, Avery and Benjamin, and a 5-year-old Boxer, Ruben. In his spare time John enjoys cycling, fencing, watching baseball, and unearthing the roots of hip-hop in jazz, R&B, Rock and Roll, and the Blues. He is a proud alumnus of Saint Benedict’s Preparatory School in Newark. He and his family currently lives in Plainfield, New Jersey.

“My approach to teaching history is not simply to rehash the facts and verify the chronology of events. Concepts that seem fixed and incontrovertible, like Western Culture, race, or even the nation, emerged and took root at specific times in history. In my courses, I direct students to consider historic narratives by engaging primary source materials that may suggest alternative ways of interpreting long standing ideas and past events. To that end, it is important to recognize how class, gender, race, religion, and ability impact the actions of historical actors, but also how those systems shape the lenses of historians. How does “who we are” shape what we see?”