At a private ceremony on November 19, 2009 10 ASP students from the Class of 2012 were inducted into the Chi Alpha Epsilon National Honor Society, by virtue of satisfying the induction criteria of two consecutive semesters of a minimum 3.0 grade point average.

Chi Alpha Epsilon was formed to recognize the academic achievements of students admitted to colleges and universities through non-traditional criteria or who utilized developmental and educational support services. In 2009, the Academic Success Program was recognized as a program eligible to induct students into this honor society. The Saint Peter’s University Educational Opportunity Fund Program was chartered as Beta Pi Chapter of Chi Alpha Epsilon in 2003. Inductions of new members are held annually.

At the public reception following the private ceremony each inductee was pinned by a friend, family member or faculty member. 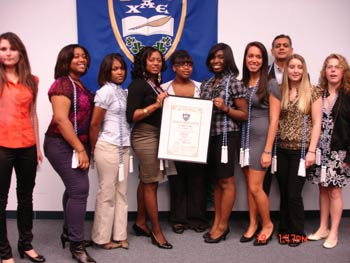 Summer Academy students Leonel Matos, Julyne Christian, and Victoria Banton-Pulley from the Class of 2010, were awarded Certificates of Achievement at the Annual Freshman Achievement Awards Luncheon on March 15, 2007, for having completed a minimum of 12 credits and achieving a GPA of 3.5 or higher in their first semester.