Saint Peter’s University, inspired by its Jesuit, Catholic identity, commitment to individual attention and grounding in the liberal arts, educates a diverse community of learners in undergraduate, graduate and professional programs to excel intellectually, lead ethically, serve compassionately and promote justice in our ever-changing urban and global environment. 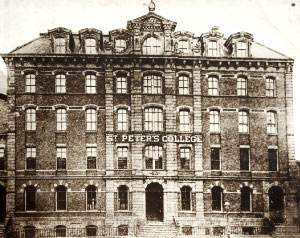 Saint Peter’s College, the Jesuit College of New Jersey, was founded as a liberal arts college for men in 1872.  When classes first started in Jersey City on September 2, 1878, seventy-one students originally enrolled in the Preparatory Department.

That number grew to one hundred and twenty-three by year’s end. They aged from ten to fifteen, and thus none of them were doing college-level work.  As more students arrived, work began on a new school building on Grand Street in 1899 (pictured right).

By 1900, the College had granted 63 Bachelor degrees and 26 Master’s degrees. Five years later, the College and Saint Peter’s High School, though located in the same building, were distinct academic institutions.

From 1918 to 1930, the College closed down due to the impact of World War I and because Jesuit superiors wanted to concentrate their manpower in other colleges on the East Coast. As noted in the College yearbook, “The classrooms went empty. The faculty closed their markbooks, and left for the battlefields.”

Saint Peter’s reopened in 1930 on the fourth floor of the Chamber of Commerce Building in downtown Jersey City, and women were admitted to the Evening Session for the first time. Robert I. Gannon, S.J., was Dean.

With the re-birth of Saint Peter’s in 1930, Rev. Gannon named the Peacock the official mascot of the College, reflecting the spirit of “resurrection and eternal life.”   The peacock also ties the College to the settling of Jersey City, originally called “Pavonia,” or “Land of the Peacock.”

Reverend Gannon introduced six new Jesuit faculty members, who brought a new vigor and outlook to the College, stressing, as their predecessors had done, a strong Catholic liberal arts program, the hallmark of a Jesuit education. By 1933, the College had made serious efforts to move from downtown Jersey City to its present site on the former Edward Young estate.

In 1936, the College moved to its present location on Kennedy Boulevard in Jersey City. Changes were gradually made on the new campus (among other buildings, McDermott Hall, Dinneen Hall, the Yanitelli Recreational Center, and Whelan Hall were started in 1949, 1956, 1973, and 1992, respectively). 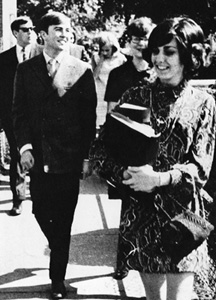 Saint Peter’s officially became fully coeducational in 1966 when women were admitted to the Day Session, although 35 women had actually been enrolled in 1944 in order to keep the College occupied during difficult financial times.

In 1975 Saint Peter’s established a branch campus, a “college for adults,” in Englewood Cliffs, New Jersey, and began working to improve the Jersey City campus, with renovations that included the conversion of the grass quad into the concrete quad on campus today.

The College offered its first graduate program in education in 1980. Also in 1980, Saint Peter’s welcomed resident students onto campus for the first time.

The 1990s proved to be a decade of expansion and growth, with dramatic increases in enrollment and the addition of more residence halls to accommodate the growing student body.

Saint Peter’s University remains faithful to its commitment to the education mission of the Society of Jesus.  Saint Peter’s University, inspired by its Jesuit, Catholic identity, commitment to individual attention and grounding in the liberal arts, educates a diverse community of learners in undergraduate, graduate and professional programs to excel intellectually, lead ethically, serve compassionately and promote justice in our ever-changing urban and global environment.