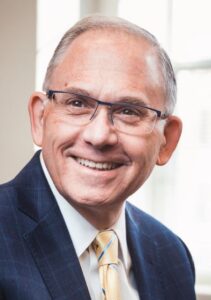 Dr. Cornacchia regularly devotes his time to many civic leadership organizations. He is a member of the board of directors of the Independent Colleges and Universities of New Jersey (ICUNJ), a board member and vice chair of the CarePoint Health Foundation and a member of the advisory board of Big Brothers/Big Sisters of Essex, Hudson and Union Counties.

Additionally, Dr. Cornacchia serves on the board of the New Jersey Presidents Council, and is a member of the board for the Catholic Charities of the Archdiocese of Newark, the Association of Jesuit College and Universities (AJCU) and the Metro Atlantic Athletic Conference (MAAC). He has chaired numerous accreditation team visits for the Middle States Commission on Higher Education. He was recently named by ROI-NJ one of New Jersey’s most influential college presidents. He is also a Third Degree Knight of Columbus.