One year ago, there were no Girl Scout troops in Greenville, a densely populated, high need community a few miles south of the Saint Peter’s University campus. That’s not unusual for underserved urban communities, where everything from the traditional troop model that relies on parent volunteers to membership fees prevents girls from participating in a program that has shaped millions of American women’s lives.

Today, the picture is quite different in Greenville. More than 130 girls from seven local schools have enrolled in the Girl Scouts. Funding for dues and uniforms has been secured, along with troop leaders, and a model for Girl Scout outreach has emerged that has the potential to be replicated in other urban communities.

The catalyst for all this progress is a trio of resourceful and determined Saint Peter’s graduate students who made “Girl Scouts in Greenville: It Takes a Village” their capstone project to complete their Master of Public Administration (MPA) degrees.

“Start small. Think big,” is how Philip Plotch, Ph.D., associate professor and director of the MPA program, urges students to approach the capstone project. “The idea is to work on a local problem,” he explained. “Students can’t solve homelessness in the United States, but they may be able to impact homelessness in Journal Square. If you solve local problems, you create a model for others to emulate.”

Devan Tierney ’19 knew she wanted to bolster opportunities for girl empowerment. At the time of the capstone project, she was development and communications coordinator at WomenRising Inc., a nonprofit in Jersey City that assists women and their families to achieve self-sufficiency. “The Girl Scouts have an amazing mission and they need to be in Jersey City,” said Tierney, who was joined on the project by Henriette Diene ’19 and Talah Hughes ’17, ’19.

Once the team researched and identified the challenges in creating and sustaining Girl Scout troops, they began to work the problem from different angles. An initial proposal focused on training college students to fill the troop leader void, but the MPA students determined it wasn’t viable in Greenville due to issues of logistics and liabilities. The team pressed on. They wrangled a meeting with Natasha Hemmings, president and CEO of Girl Scouts Heart of New Jersey (GSHNJ), engaged with public and charter school principals and conducted extensive, on the-ground outreach to families. 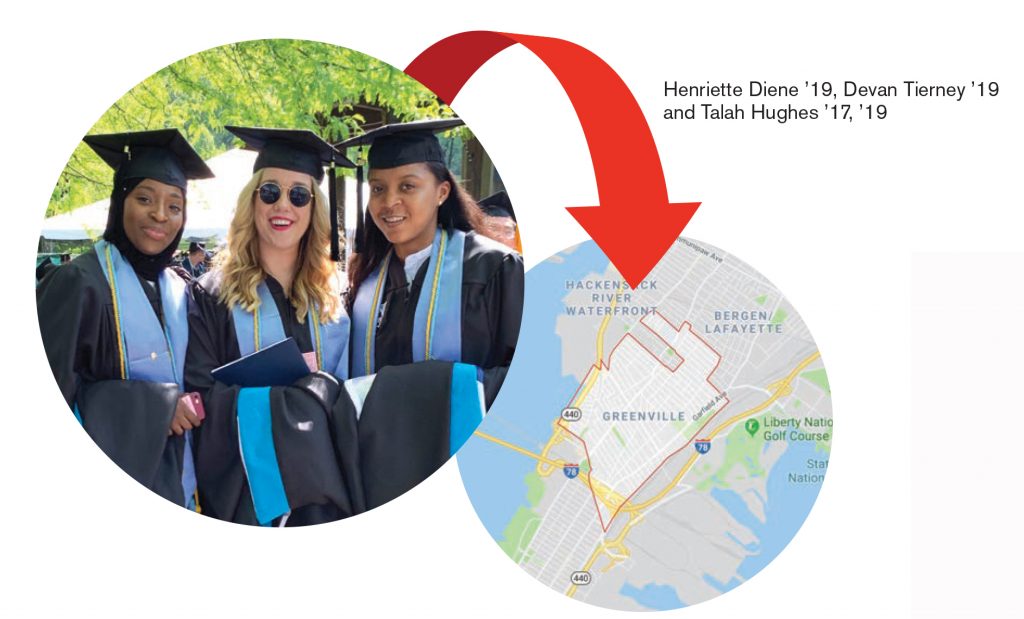 Diene lives in the neighborhood and often bumps into Greenville’s newest Girl Scouts. “This is a sustainable plan we’ve created,” said the MPA candidate, who will graduate from Saint Peter’s in December. The experience also taught Diene skills she hopes to use in grassroots organizing and community development. “I found out that I don’t shy away from challenge and I don’t take ‘no’ for an answer.”

Hughes, who lives in Beacon, N.Y., said one of the project’s greatest outcomes was the relationship it created between Dr. Webster and the Girl Scouts Emerging Markets Team, an initiative to grow scouting in communities where the organization is underrepresented. The partnership has the potential to expand the volunteer pool in Jersey City exponentially and bring 300 to 400 more Girl Scouts into the leadership program.

“Making that connection was the grand finale,” said Hughes, a grants assistant at Cornerstone Family Healthcare, a nonprofit primary and preventative health provider. “That gave the project a sense of accountability and sustainability.”

Tierney, who has been promoted since earning her MPA, said growing Girl Scout troops in Greenville is now under the purview of the Emerging Markets Team. “We hope the work that was started progresses into the school year and future,” she said. “It really does take a village.”

Their professor is suitably impressed. “This was an amazing accomplishment on the part of these students,” said Dr. Plotch. “They are not willing to give up. And their idealism helped them do something that others couldn’t get done.”