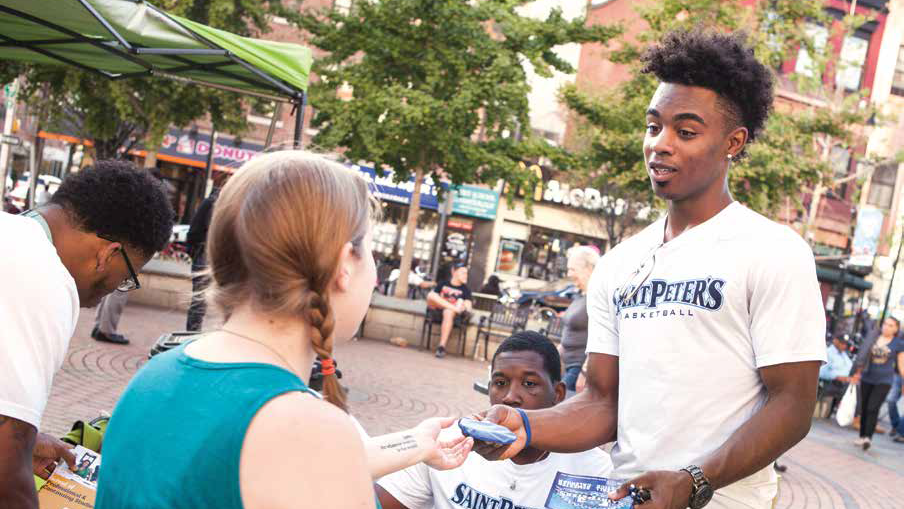 “We are out and meeting people within the community,” said Nicholas Chiaravalloti, director of community engagement, who accompanied several students to the block party. “The University has always done a good job on community engagement, but with the new strategic plan, it’s more intentional and conscious. With Pathways to Distinction, we are building direct relationships between the institution and the community.”

This includes a number of initiatives that take place off and on campus. Since 2012, the social justice and honors programs have hosted JC Fridays at the King-
Kairos Social Justice House. The new season kicked off in September with an exhibit of two artists in the community garden, Joe Zappa-Costa and Mr. Mustart. Known for revitalizing Jersey City with his vivid murals, Mr. Mustart commemorated the 50th anniversary of the visit of Dr. Martin Luther King Jr. H ’65 to Saint Peter’s by painting new images of the civil rights leader and the University president who invited him to campus, Rev. Victor R. Yanitelli, S.J..

The Mac Mahon Student Center also served as a host location for the 25th annual JC Art & Studio Tour in October and Saint Peter’s representatives are a regular presence at the downtown Farmers’ Market.

Outreach is also underway beyond Hudson County. Chiaravalloti noted that the location of the Englewood Cliffs campus led the University to establish ties with The Community Chest, an organization that supports local nonprofits in the Englewood area. “The feedback from the community has been 100 percent positive,” he said. “People are interested in what’s happening at Saint Peter’s and they are impressed with our students. With each new success our credibility grows, so the potential is just incredible.”

Two National Awards recognized Saint Peter’s University for community partnerships and service. The University earned a 2015 Community Engagement Classification from The Carnegie Foundation and was named to the 2014 President’s Higher Education Community Service Honor Roll in all four of its categories.

For the second year, students enrolled in a senior business seminar developed marketing and promotional plans for local companies through Town and Gown, a partnership between the Hudson County Chamber of Commerce and Saint Peter’s University.

Approximately 60 students put their business learning into action on a range of initiatives for nine Chamber member businesses. In addition to fostering stronger ties to area businesses, graduating seniors said the consultancy project provided valuable career experience. The program operates under the auspices of the Ignite Institute, a Center of Excellence at Saint Peter’s that partners with Rising Tide Capital to provide thought leadership, academic research and direct service to entrepreneurs and small businesses in Hudson County.

Growing with the Community