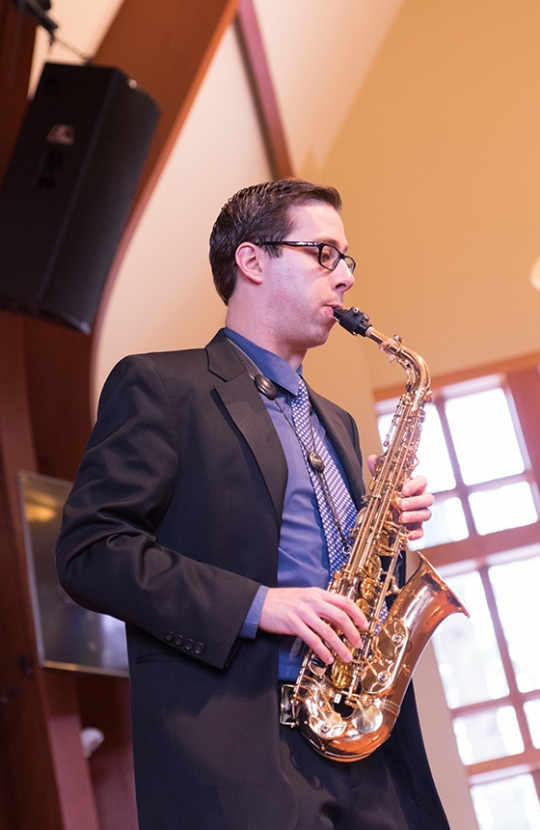 Dr. Jordan P. Smith is a Princeton-based saxophonist and conductor. He completed his D.M.A. at Mason Gross School of the Arts, Rutgers University, where he studied with Dr. Paul Cohen. He holds an M.M. degree in Saxophone Performance from Manhattan School of Music (MSM) and a B.M. in Music Education from The College of New Jersey (TCNJ)

Dr. Smith has concertized extensively throughout the United States and internationally in Germany, Austria, the Czech Republic, and Greece as a soloist, chamber, and orchestral musician, and has recently performed with the New World Symphony, Chamber Orchestra of Philadelphia, and more under such conductors such as Michael Tilson Thomas and Robert Spano. Recent performance venues have included Haydn Hall in Eisenstadt, Austria, Carnegie Hall’s Stern Auditorium, Lincoln Center’s Bruno Walter Auditorium, the Metropolitan Museum of Art, Knight Concert Hall at the Adrienne Arsht Center in Miami, and many more. As a chamber musician in New York City, Jordan has premiered over 30 works by composers from around the world. He is also a member of the Manhattan Saxophone Quartet (MSQ) and the Nottingham Trio (violin, saxophone, piano).
More

Dr. Smith was published in the August 2015 edition of the “Saxophone Symposium” for his research on Jules Massenet and was also published in a 2011 issue of the “Saxophone Journal” for an article about Prokofiev’s Lieutenant Kijé Suite. He can be heard on CD on Ravello, Navona, Blue Griffin, and Carrier records

Dr. Smith is the director of the renowned Saxophone Program of Youth Orchestra of Central Jersey, the only program of its kind in the United States. At YOCJ, an average of 40 talented saxophonists each year in grades 6-12 perform in a saxophone orchestra setting. Dr. Smith is also an Adjunct Professor at Saint Peter’s University in Jersey City, NJ where he teaches music history and maintains a large private teaching studio in Hightstown, NJ.

“My teaching philosophy is first and foremost dedicated to the idea that the joy of music resides in everyone. A music teacher’s job, whether at the elementary or collegiate level, is to help unlock this joy through the freeing of students from the constraints of technique, their instrument, and their fear of failure. Indeed, the goal of musical instruction is to eventually set the student free from the academic, allowing them to experience music in a deeply personal way, and then to share this personal experience with others. This sharing of musical joy, wonder, and discovery is what has helped to keep classical music alive and well after hundreds of years.”