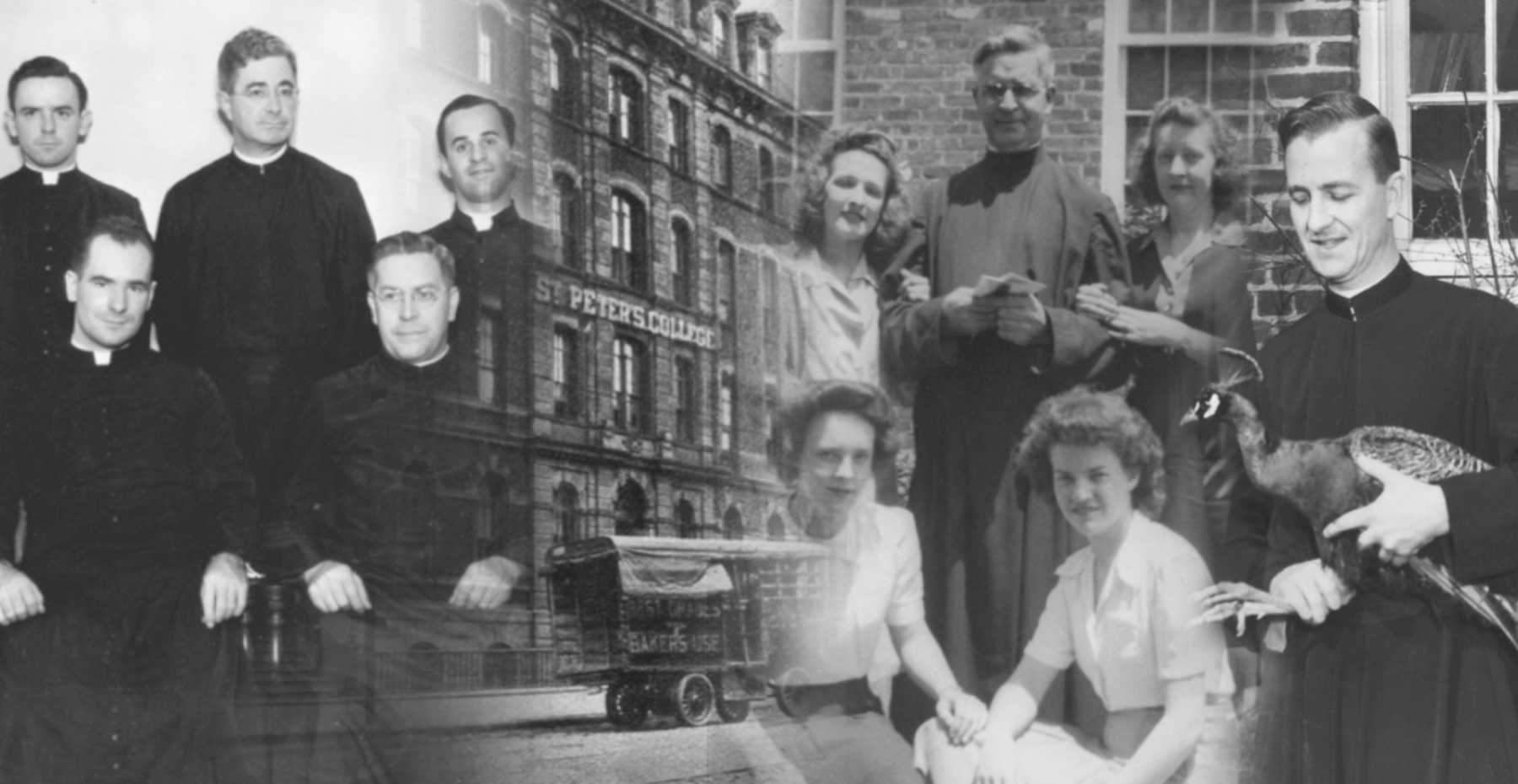 In the spirit of the Centennial celebration in 1972, the Sesquicentennial Commission seeks to “enliven, enlighten and enrich” the campus with a year-long celebration. The Sesquicentennial Year features liturgies, lectures, community service activities, concerts, seminars, library exhibits and a host of student-run events.

Founders’ Week honors the origins of Saint Peter’s University when on April 3, 1872, the State of New Jersey awarded a charter to five Jesuit priests to establish “Saint Peter’s College.” (Read more about the events leading up to this historic moment in the Sesquicentennial Timeline.)

Monday, April 4
150th Birthday Launch
8:30 a.m. – 1:00 p.m., Mac Mahon Student Center
What better way to start the week than with a birthday launch party! Stop by the student center between 8:30 a.m. and 1:00 p.m. to learn more about Founders’ Week, pick up event information, sign the commemorative banner, take selfies with the 150th anniversary logo and enjoy refreshments! A special appearance by the Peacock mascot is also planned!

Library Exhibit: Saint Peter’s University Rare Books and Special Collections: Exercitia Spiritualia S. P. Ignatii Loyolae, 1676, in commemoration of the Ignatian Year
April 4-31, Theresa and Edward O’Toole Library
Visit the Theresa and Edward O’Toole Library to view the original charter awarded to Saint Peter’s, along with a special exhibit on Jesuit spirituality from the University’s Rare Books collection. While there, enter your name in a raffle for a 150th anniversary blanket, with the winning ticket to be drawn on Friday, April 8.

Wednesday, April 6
Governor Murphy Celebrates 150 Years of Saint Peter’s University!
11:00 a.m., Mac Mahon Student Center – The Duncan Family Sky Room
Governor Phil Murphy will visit campus on April 6 to celebrate our anniversary and the State of New Jersey’s appreciation of Saint Peter’s since 1872. The Governor will address the students, faculty, staff, administrators, alumni and friends of Saint Peter’s at 11:00 a.m. Let’s give a strong Peacock welcome to the Governor!

Saint Peter Day
All day
Saint Peter Day is an annual fundraising event for the University. A group of generous alumni from across the decades will match the first $150,000 raised. Whether your Saint Peter’s passion is rooted in academics, mission and ministry, athletics or student life, your generosity will have twice the impact.  Make a gift.

Friday, April 8
We can’t celebrate our 150th anniversary without celebrating Jersey City! In collaboration with the Office of Alumni Engagement, two tours of Jersey City will be offered. Space is limited and will be offered on a first-come, first-serve basis.

SPU from Downton to the Boulevard: Bus Tour of Jersey City
12:30 – 1:30 p.m., leaving from Panepinto Plaza outside the Mac Mahon Student Center
Enjoy a guided shuttle tour of Jersey City with John J. Hallanan III ’03, Saint Peter’s University Regent and former Jersey City Landmarks Conservatory Board president, and John E. Hammett III, Ed.D., chair & professor of mathematics. The group which will trace the University’s past and highlight the history of our city. Register here.

Peacock Pride Day
11:45 a.m. – 1:30 p.m., Panepinto Plaza
Show your school spirit at Peacock Pride Day! Food, inflatable games and photos with our very own mascot, Pete the Peacock. Wear your favorite Saint Peter’s gear to campus as you #StrutUp to this event.

Grit ‘N Wit
3:00 – 5:00 p.m., Panepinto Plaza
Once again, students, faculty, staff and administrators are invited to participate in this obstacle course for brain and body! Grit ‘N Wit is a team based challenge course that features 16 physical and mental obstacles spread across campus. Sign up today for this fun event where “brawn meets brain.” Check out the Saint Peter’s University promo video for Grit ‘N Wit.

October 14
Latinas in the Legislature: A Panel Discussion Sponsored by the Guarini Institute for Government and Leadership

October 28
Living Friendship and Community in a Divided World: A Conversation between Joseph Cardinal Tobin and Sir Gilbert Levine

September 15
Mass of the Holy Spirit  and 150th Kick-off: Flag Raising and Party

September 21
Commemoration of 100,000 Meals by the Campus Kitchen and Recognition of Corporate Partners