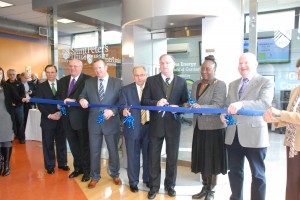 The Green Energy Command Center, monitors the impact of green energy initiatives on campus 24 hours a day by tracking the amount and type of energy being used on campus, the total amount of energy savings and data on the carbon saving benefits. The latter, for example, is prominently displayed on one of several screens in the Command Center and charts the amount of carbon dioxide savings at the University. The amount is equivalent to 1,627 planted trees since the Green Energy Command Center opened early in 2013. 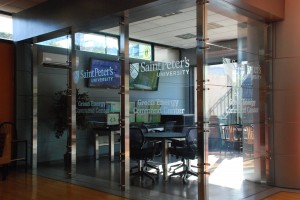 The Green Energy Command Center, located in the lower level of Dinneen Hall, serves as the nucleus of Saint Peter’s green energy efforts, a facility filled with software and equipment that tracks energy usage and savings and carbon waste on campus. The center will also serve as a learning laboratory and will be used as an educational tool for students from a wide range of academic programs.

“We have built some 1,700 cogeneration and trigeneration projects in Europe, but this is the first in the United States,” stated Chris Hayton, CEO of ENER-G’s USA operations for ENER-G Holdings PLC, a leading European developer and operator of clean, renewable and distributed power generation projects and provider of various clean technology solutions. “Saint Peter’s took and made the commitment to this initiative.” 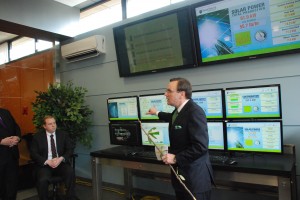 Green energy, which can be harnessed with little pollution, includes anaerobic digestion, geothermal power, wind power, small-scale hydropower, solar energy, biomass power, tidal power, wave power, and some forms of nuclear power. In November 2011, the University began a green energy initiative on its West Campus, which is now in the final stages of completion. The program involved the installation of solar arrays above a number of buildings on the campus to generate electricity. These buildings include Dinneen Hall, Pope Hall, McDermott Hall and The Victor R. Yanitelli, S.J. Recreational Life Center (RLC) parking deck. A cogeneration plant was also built in the basement of Pope Hall that produces both low carbon heat and electricity for academic buildings on the West Campus. 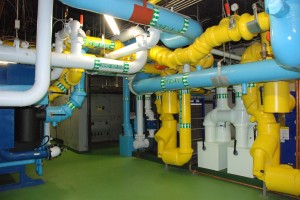 “As a Jesuit, Catholic institution, Saint Peter’s strongly believes in being a good steward of God’s creation, and has sought cutting-edge science to assist in the goal of reducing the carbon footprint of the University,” said Dr. Cornacchia.

To view additional photos from the event, please click here. 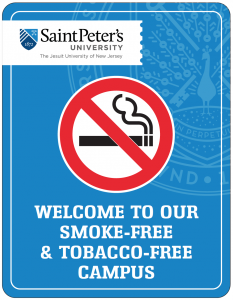