Jersey City, N.J. – August 15, 2022 – Saint Peter’s today announced that it has been named the university-of-record for Jersey City’s Department of Health and Human Services, Division of Veterans Affairs (DVA). The collaboration will support both partners’ mutual goals to provide veterans with opportunities for post-service excellence and a healthy transition into a rewarding civilian life. Through this agreement Saint Peter’s University will host Jersey City’s annual Veteran’s Day celebration as well as programming and monthly events throughout the year. “Supporting our veterans is truly a community effort and Saint Peter’s is honored to collaborate with the City of Jersey City to deliver on that goal,” said Frank Rivera, director of military and veterans services. “The University has a wealth of resources to offer veterans and military personnel and we look forward to building on the successful initiatives already developed by the DVA.”

The programming at Saint Peter’s will be focused on providing social, economic and academic opportunities, giving veterans the ability to connect while addressing basic needs such as food security and housing as well as education on the benefits that are available to veterans and how they can be utilized.

“We have a large amount veterans who proudly served our country and are now living within our community, many of whom will greatly benefit from this latest initiative to enhance, support and expand opportunities specifically tailored to meet our veterans’ needs,” said Jersey City Mayor Steven M. Fulop H ’14, a veteran of the United States Marine Corps. “After fighting to preserve our freedoms, our veterans deserve access to education, jobs and other critical services. The more we work to collaborate with our veteran population, the more we can help them live as productive citizens.”

Saint Peter’s University will host the Division of Veterans Affairs’ ongoing monthly “Coffee and Conversations” events, which are designed to promote networking among veterans. The University will also invite expert faculty and administration to speak to provide education on a variety of topics. For example, representatives from the University’s Center for Career Engagement and Experiential Learning (CEEL) will explore job prospects and provide professional development and resume building workshops for veterans. 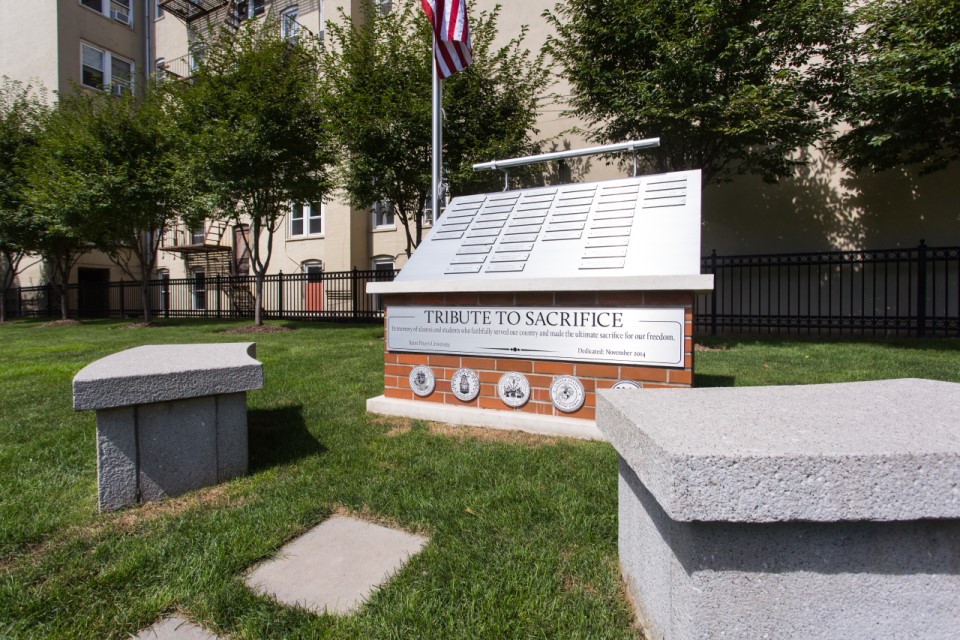 Tribute to Sacrifice Veterans Memorial on the Saint Peter’s campus.

As part of the City of Jersey City’s commitment to welcome and integrate veterans and military personnel into its communities and institutions such as Saint Peter’s, it established the Veterans’ Advisory Task Force. Saint Peter’s is an active member and Rivera currently serves as the education liaison officer. This latest partnership expands on the University’s relationship with Jersey City and its commitment to serve its veteran students and the veterans in the wider community.

“As the number of veterans in our country continues to rise, we believe this agreement will help us tap into the younger generation of vets in Jersey City,” said Rivera. “This will not only expand the resources for our students, but it will open up our doors so our community members can experience what Saint Peter’s has to offer. The University is centrally located in the City and parking is available so we hope it makes our events accessible and well-attended.”

In November 2021 Saint Peter’s was recognized with the New Jersey Governor’s “We Value Our Veterans” Academia Award in recognition of the University’s efforts to support veterans and military personnel. The University qualified for the honor due to a number of initiatives such as the Veterans Memorial on the University’s campus titled Tribute to Sacrifice, designated parking spaces for Purple Heart/veteran students, priority registration for veteran and active military students and a dedicated webpage highlighting veteran services. Saint Peter’s also recently expanded its resources for veterans and military personnel with the opening of the Center for Military and Veterans Services.