A Woman For Others: A Profile of Carmen Benitez ’22

This year was an important one for Saint Peter’s and its roots as the only Jesuit University in New Jersey. Not only is the University celebrating its Sesquicentennial, or 150th, anniversary, the Society of Jesus, or the Jesuits, have identified this year (May 20, 2021 to July 31, 2022) as the Ignatian Year because it marks the 500th anniversary of Saint Ignatius Loyola’s injury during the Battle of Pamplona, which ultimately led to his conversion from soldier to saint.

Saint Peter’s takes great pride in its Jesuit and Catholic heritage. In commemoration of this important year, Carmen Benitez ’22, a criminal justice major, shared her experience in embracing the Jesuit values that make Saint Peter’s the special place it is. 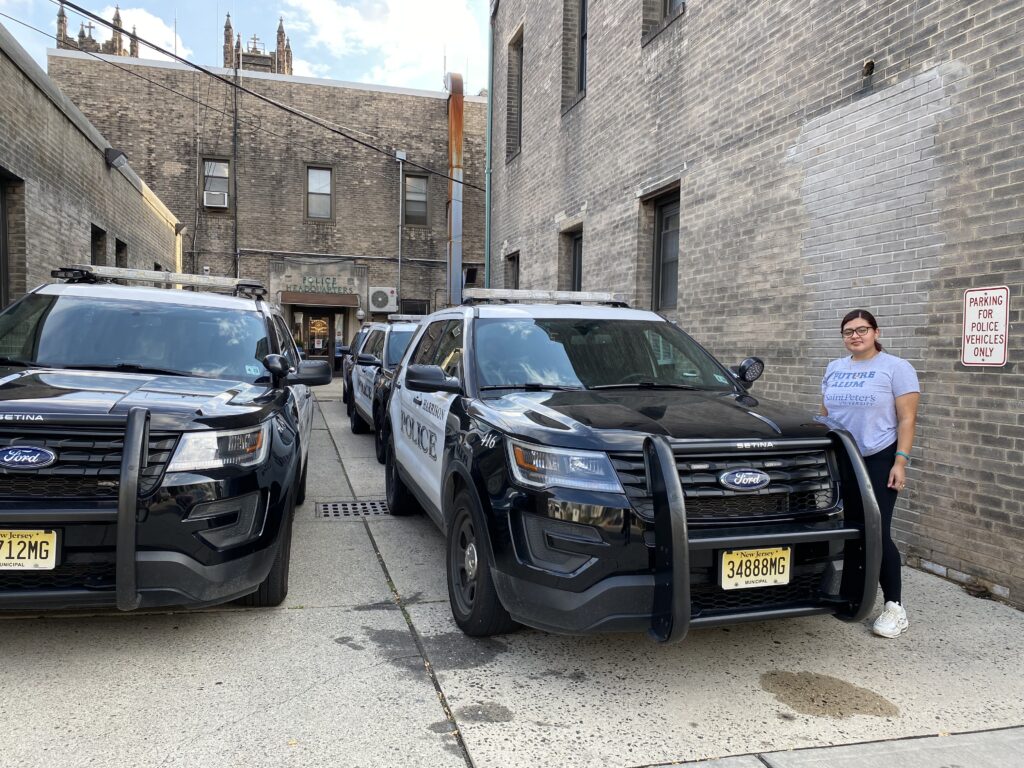 Cura personalis is a Latin phrase that means “care for the whole person.” It is a value of Jesuit education, which ensures care for a student’s mind, body and spirit. Benitez experienced cura personalis in more ways than one during her time at Saint Peter’s.

Benitez always knew she wanted to be a police officer ever since she was in middle school. When it was time to choose a college she went to various open houses, but felt most comfortable at Saint Peter’s due to the small class sizes and personal attention that the University offered. Her intuition paid off because it was the first course she took with Bryan Royster, Ed.D., assistant professor of criminal justice, that had a profound impact on her college career.

“On the first day of class Dr. Royster asked us to raise our hands if we were shy, which I did because I was a very quiet and introverted person,” explained Benitez. “Little did I know that it meant he would pick on me and engage me in every discussion. He challenged me to step outside my comfort zone and it helped me to develop confidence I never thought I could have.” 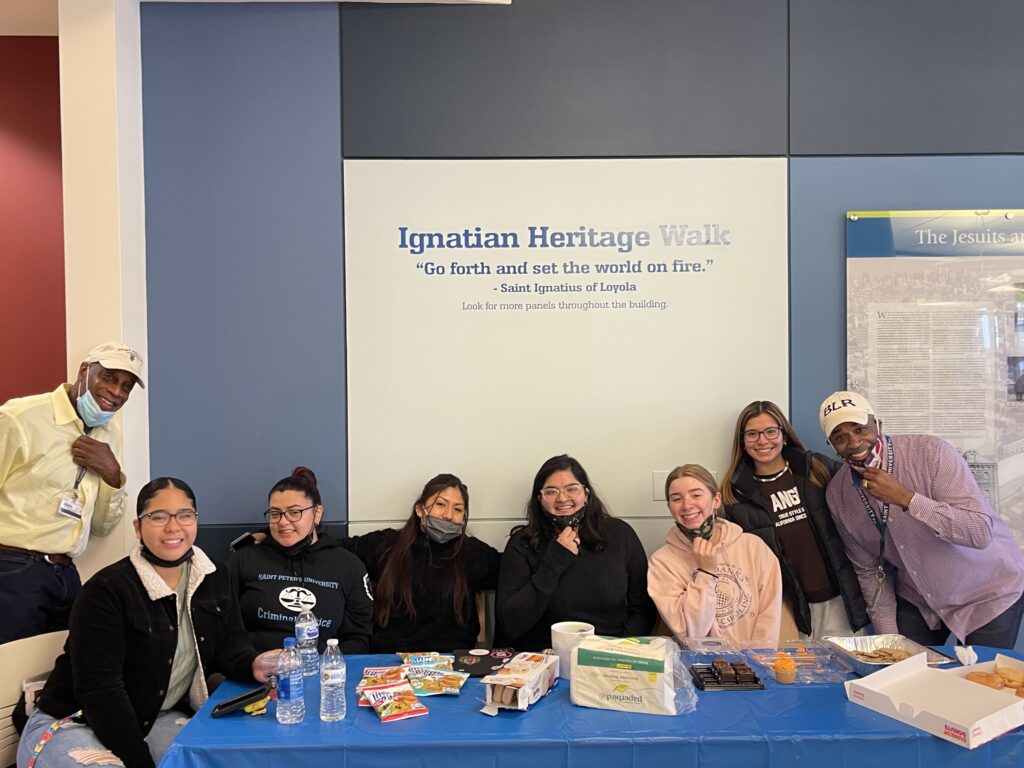 It was because of her relationship with Dr. Royster that Benitez became president of the Criminal Justice Association at Saint Peter’s, which regularly holds programming for criminal justice majors and minors.

But it wasn’t just Dr. Royster who had an impact on Benitez. “All of the professors at Saint Peter’s are amazing. It is like being a part of a family,” she said.

Kevin Callahan, J.D. ’69, lecturer of criminal justice, helped her to land an internship with the Harrison Police Department during the fall 2021 semester. During her internship she had firsthand experience working as a police officer as she went on calls and patrolled with the team.

“Judge Callahan takes the time to figure out what areas each student is interested in and makes sure that they get an internship in that field,” she explained.

Finding God in All Things 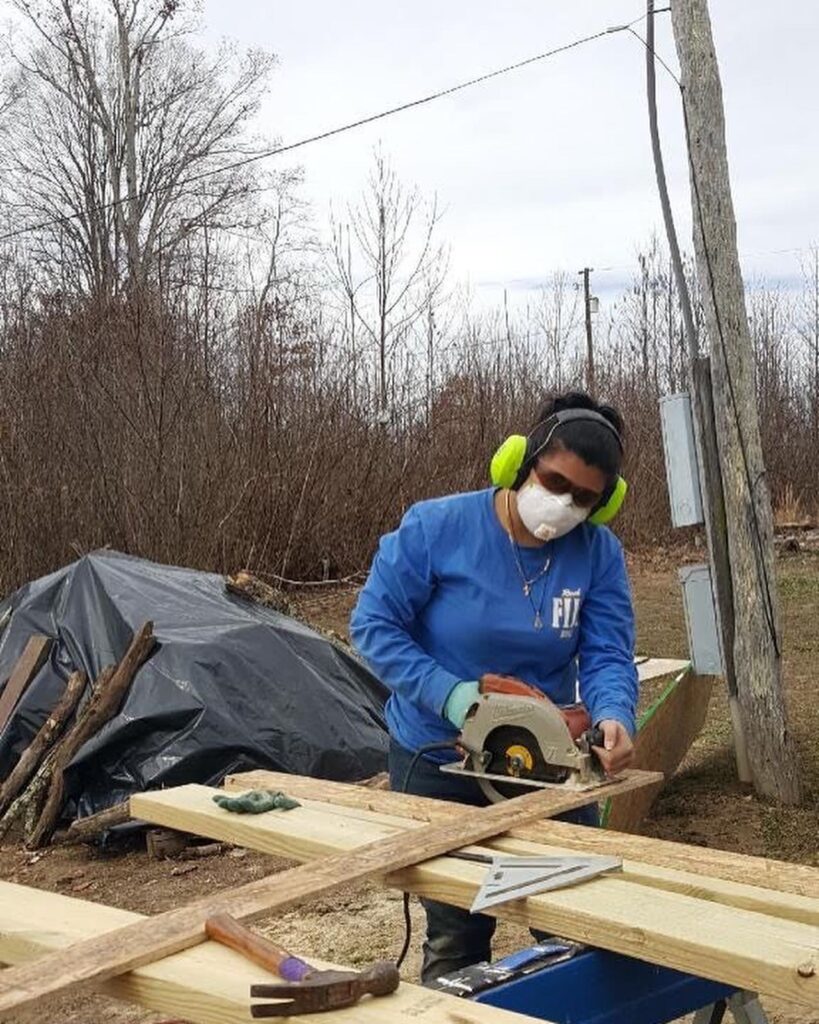 Finding God in all things is the foundation of Ignatian spirituality and is a value of Jesuit education because it invites students to find God in every circumstance. Benitez truly embraced this value when she became involved with the Office of Campus Ministry at Saint Peter’s University after meeting Campus Minister Jennifer Monsalve.

“Students don’t always know what the Office of Campus Ministry is or what they do, but once you find them it is impossible not to get involved,” Benitez explained.

Benitez has served as a retreat leader since her sophomore year. “Before coming to Saint Peter’s I didn’t know what a retreat was, but participating in them really helped me to embrace my Catholic faith, which has also helped me in my life overall,” she explained.

Most recently, Benitez participated in a spring break retreat at Bethlehem Farms in West Virginia. Initially, Benitez couldn’t afford the cost to attend the trip, but the Office of Campus Ministry identified the funds to ensure that she could participate.

Bethlehem Farms is a Catholic community in Appalachia that transforms lives through service with the local community and the teaching of sustainable practices. Benitez and her fellow Saint Peter’s classmates stayed for a week and led construction projects, painted homes, farmed, built fences and more.

People for and with Others

One of the key values of a Jesuit education is to develop people for and with others. This means that Jesuit educated students develop a dedication to help those in need and to stand up for marginalized members of society. 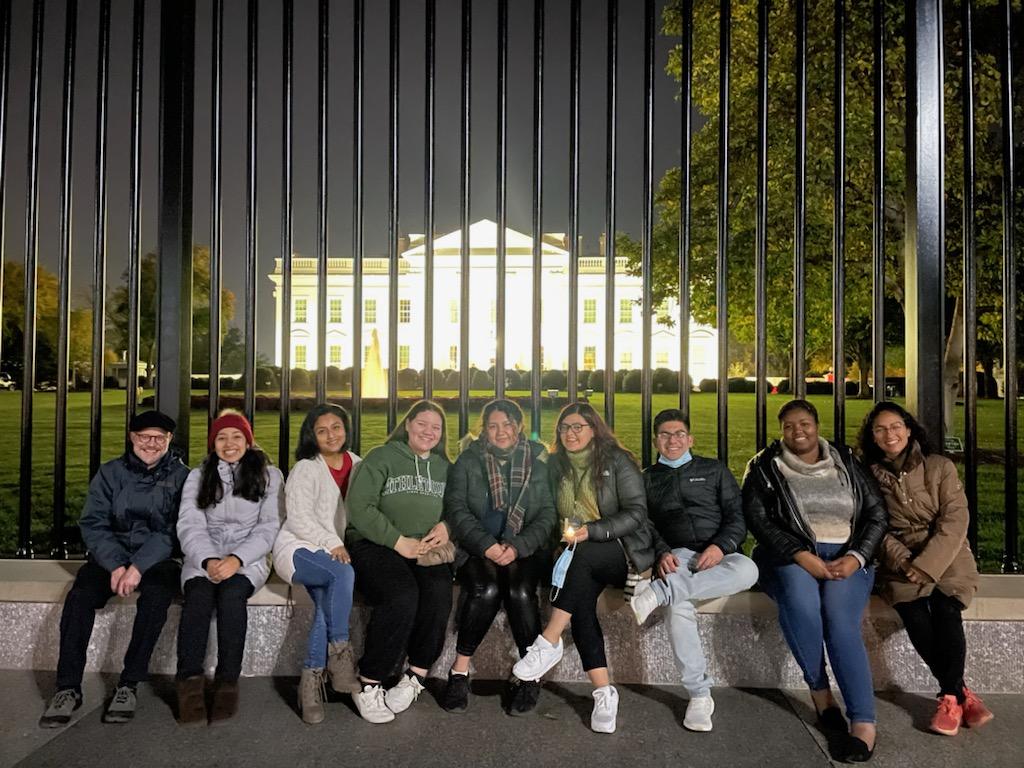 Beyond her retreat work, Benitez has also volunteered to help with the Captain Mark Lee Sr. Annual Angel Giving Tree. The Giving Tree is an annual Saint Peter’s tradition in which community members purchase Christmas gifts for area children in need.

Benitez also participated in the Ignatian Family Teach-In for Justice in Washington D.C. The group learned about immigration, making a difference, how the Church supports immigrants facing deportation and more. The students also had the opportunity to meet students from other Jesuit schools across the country.

Her commitment to helping others extends beyond her work with the Office of Campus Ministry. As a criminal justice student she assisted Beth Adubato, Ph.D., associate professor of criminal justice, to host a Take Back the Night event on campus to help put a stop to domestic violence. She also acted as a translator for Spanish-speaking victims during her internship with the Harrison Police Department.

“We have to become a new voice for the ones who can’t speak for themselves,” said Benitez. “We are the new change and we can do anything God enables us to accomplish.”

Saint Peter’s takes great pride in Jesuit Educated students like Benitez and looks forward to seeing all she will accomplish as an alumna.