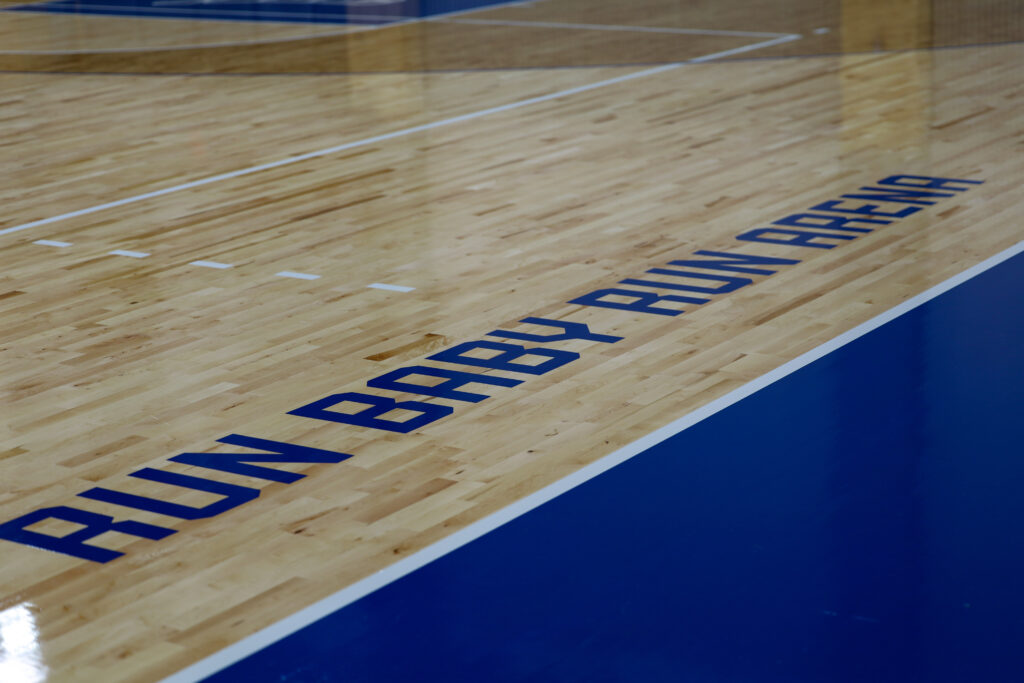 Thomas P. Mac Mahon ’68, member of the Saint Peter’s University Board of Trustees and retired chairman and chief executive officer of LabCorp, committed a $5 million lead gift to help support renovation of the RLC and the creation of the arena. In celebration of the University’s proud legacy of Peacock basketball, Mac Mahon made the decision to honor his 1967-68 men’s basketball teammates and name the transformed space the “Run Baby Run Arena.” The “Run Baby Run” team defeated Duke in the NIT quarterfinals in 1968.

“This celebration comes at an ideal time because the University is currently commemorating its Sesquicentennial year. What better way to pay tribute to our past than to dedicate this impressive new arena in honor of a historic time in Saint Peter’s history,” said Eugene J. Cornacchia, Ph.D., president of Saint Peter’s University. “We are humbled by Tom’s continued belief in and support of Saint Peter’s and we look forward to honoring his extraordinary philanthropy and the legacy of the Run Baby Run team.”

The Run Baby Run Arena features a number of amenities for students and guests, including new retractable bleachers with an allotment of chairback seating, a full replacement of the hardwood court surface, updated branding and signage, a reimagined entryway to the facility, enhanced lighting and new video scoreboards. The University also recently announced the Run Baby Run Arena Seatback Campaign, which enables fans to purchase a special Peacock Plaque that will be affixed to a seatback chair in the arena. This will allow fans to enjoy a lasting commemoration of their passion for Peacock athletics or give them the opportunity to honor someone else.

“I will always remember the special bond that I had with my teammates from 1967 and 1968,” said Mac Mahon. “My experiences during those years inspired my desire to create an arena that the Saint Peter’s community can be proud of. I would like to thank everyone who put in such a significant effort to make this a reality.”

Mac Mahon presided as chair of the Board of Trustees from 2012 to 2018, which proved to be a time of unprecedented growth at the University under his leadership. Beyond his Saint Peter’s affiliations, Mac Mahon has been cited by Forbes magazine (2004) and the Harvard Business Review (2010) as one of the best performing CEOs in the world. Prior to serving as LabCorp’s chairman and chief executive officer from 1997 to 2006, he was a director from 1996 to 2013.

“The opening of the Run Baby Run Arena is a tangible reminder of our mission to provide opportunities which enable student-athletes to reach their full potential in academic and athletic pursuits,” said Rachelle Paul, director of athletics. “This is made possible, in part, by our unwavering commitment to providing the highest quality resources. These new facilities are a bold reflection of that commitment.”

The long-term vision for future renovations to the RLC is focused on transforming the historic and fundamentally vital facility while enhancing the experience for current and future students, the University’s Division I student-athletes, alumni, members of the local community, Peacock fans and more. Future phases will be funded by restricted gifts with the goal of impacting recruitment, community engagement, support for athletics and institutional pride.

Tickets for the game will be available on site. Saint Peter’s University students, faculty, staff and administrators are admitted to all regular season basketball games free of charge by presenting their Spirit ID. Please see the Spectator Policy for more information about requirements to attend indoor athletic events this year.