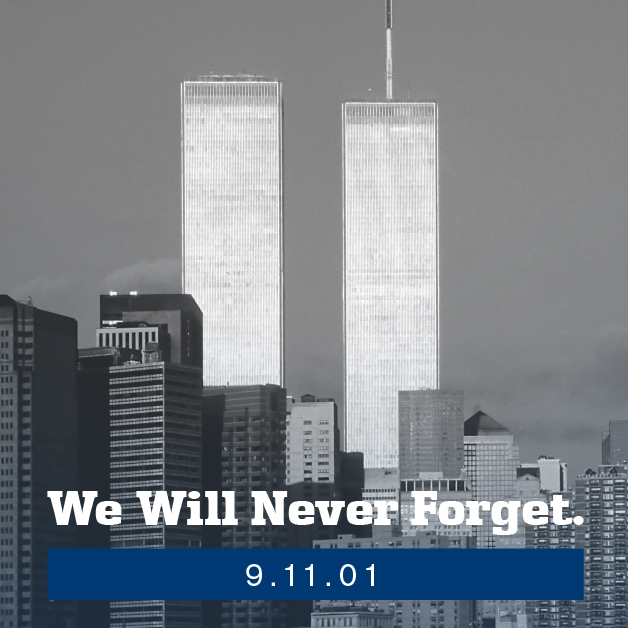 On September 9, 2021 the Saint Peter’s community gathered to commemorate the 20th anniversary of 9/11. Eileen L. Poiani, Ph.D., special assistant to the president/professor of mathematics and chair of the Sustainability Council, shared her account of what campus was like on that tragic day. Read more about the event in an article from The Jersey Journal.

Driving in to Jersey City, my car radio announced a problem at the World Trade Center. Then silence. I parked the car and met up with colleagues who were all confused by whatever was happening. I ran east on Montgomery Street only to see dead ahead black smoke poisoning the air from a slice of the tower – the only cloud in a cloudless blue sky. I went inside and heard news that a plane had hit Tower 1. A group of us went outside only to see Tower 2 sliced by another plane and eventually fall.

Our President, Rev. James Loughran, S.J., marshaled the College Crisis Management Team about what we should do with this unprecedented situation only a few miles from campus? Our first response was to secure the campus, consider what students might be at the World Trade Center on internships, console students and employees who had family members working at the Towers and connect with the Jersey City government.

As facts unfolded, what did we do to assist at the Waterfront, where downtown was covered in ash and triage areas were being created on both sides of the river?

More than 200 students plus whole athletic teams, alumni and others went to the Waterfront to help. Some crossed the Hudson in boats more than once to deliver supplies and bring injured back to Jersey City. Some Jesuits went to bless and support the wounded. Our dining service provider sent hundreds of pounds of ice to the Waterfront.

And what did we do on campus?

Classes were suspended from mid-day 9/11 through 9/12. Students bunked together in residence halls to make a place where faculty, commuters and others who were stranded would find a place to rest. A quiet space was designated for the counseling center staff to be available at any time to meet with our college community members. Student affairs circulated its Magis Pledge to remind everyone of the importance of respect and responsible behavior toward others. I am grateful to say everyone adhered to these principles. Fr. Loughran was the homilist at an 11:30 am liturgy on September 11. A special Mass was held on September 12 and an Interfaith Prayer Service and Prayer for Peace followed by a Mass were held on September 14. Community service coordinated a blood drive, collected clothes and donations.

Early news came that the New York firefighter brother of my assistant, Susan Tegtmeier, was safe, but sadly he later perished at the World Trade Center. So many angels from the Saint Peter’s community proved that our Jesuit values of cura personalis and men and women for and with others were etched in their hearts. Countless Saint Peter’s people were the heroes of that day and for many months thereafter.