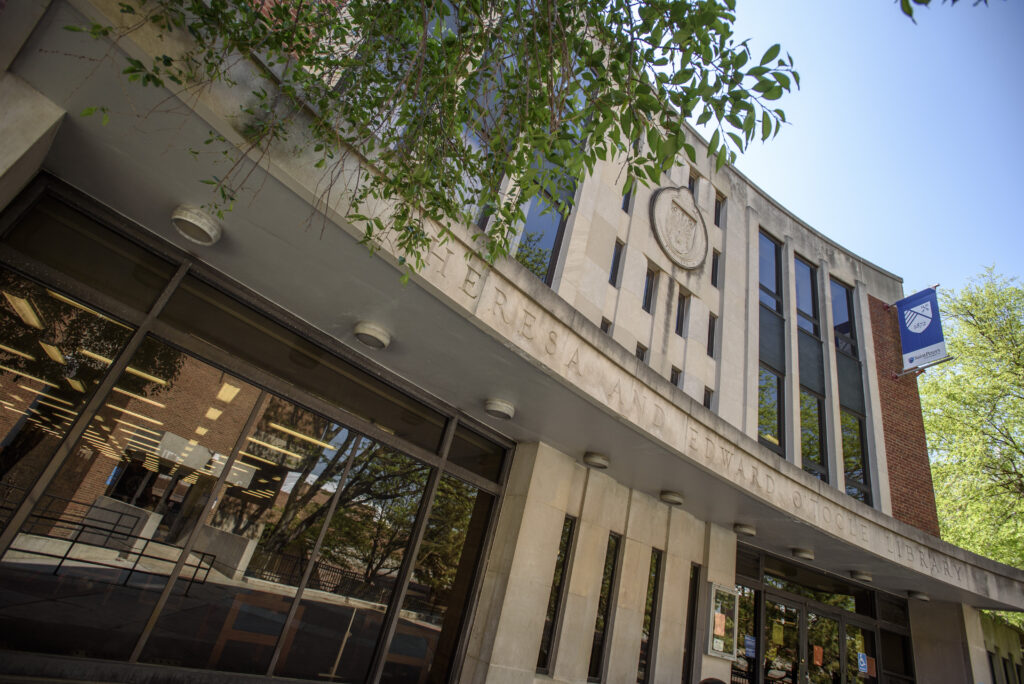 Jersey City, N.J. – August 31, 2021 – Saint Peter’s University announced today that it has been awarded a $250,000 grant by The Theresa and Edward O’Toole Foundation for capital improvements to the University’s Theresa and Edward O’Toole Library. The grant will be used for modernization and energy efficient upgrades, largely centered on the replacement of the north wall of windows, an iconic centerpiece of the building.

Saint Peter’s has taken many steps toward sustainability over the past few decades on campus and beyond. Windows are a major factor in energy loss and consumption and replacements in the O’Toole Library will improve the space’s energy efficiency, which is consistent with the University’s Climate Action Plan. The capital project will also improve student comfort and maintain temperature and humidity controls, which is critical in the preservation of library and archival collections.

“I’m tremendously grateful to have the support of The Theresa and Edward O’Toole Foundation to improve research and study conditions in the O’Toole Library,” said Daisy DeCoster, director of the Theresa and Edward O’Toole Library. “Every Saint Peter’s student deserves comfortable, wired, well-lit library spaces and we’re making that possible through these renovations.”

“For decades the Theresa and Edward O’Toole Library has been an academic centerpiece of the University,” said Eugene J. Cornacchia, Ph.D., president of Saint Peter’s University. “We are grateful to the O’Toole Family and O’Toole Foundation for their generosity, which has enabled us to create and maintain this space that has served generations of Saint Peter’s students.”

Recent capital improvements to the O’Toole Library include the O’Toole Library Digital Research Commons, which was completed in fall 2020. This is a space within the library that was re-imagined with new seating areas for collaboration or individual study. Infrastructure upgrades like new lighting and faster WiFi provide a productive work environment along with a laptop bar, outlets and charging stations for electronic devices and new desktop computers.