By Patrick Cucurullo ’20, opinions editor of The Pauw Wow 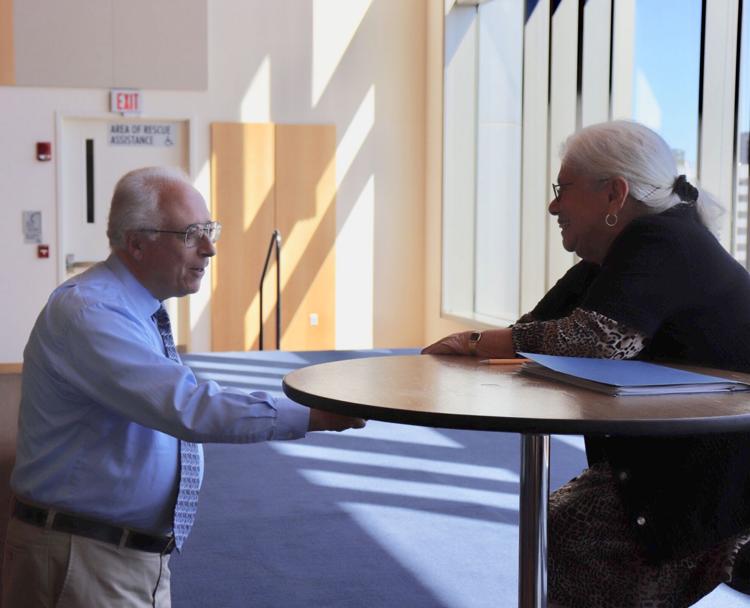 They protested, staged boycotts and some burned their bras in the street, but a hundred years ago, women could not vote in America. It wasn’t until the ratification of the 19th Amendment to the Constitution of the United States that women could participate in our democracy.

Nearly 80 years later, in a state which had its own internal strife over the issue of suffrage, Deborah Poritz ascended to the bench of the New Jersey Supreme Court to serve as its Chief Justice in 1996. She continued to serve the Court until her departure ten years later.

Justice Poritz visited Saint Peter’s on Tuesday to talk about her journey to the bench, while also offering her own perspective on the role of women in the professional and legal world, as the nation approaches the centennial anniversary of that history-changing Amendment.

Portiz shared the history of that fight, specifically touching on how women in today’s world still face many of the same challenges that women of her generation faced, such as sexual harassment in the workplace and the stigma that women need help where their male counterparts do not.

“It was a long fight for equality,” she said. “With all the progress we’ve made, there are still issues, there is still progress to be made. The fight isn’t over.”

She went on to discuss New Jersey’s history, for example, how racial minorities and women had the ability to vote in the state until 1807, when state legislators caved to outside political pressure and stripped them of that right.

In those days, there was no constitutional provision guaranteeing them the vote. Political interests stymied the voices of countless New Jerseyans for many years that followed.

Of course, with time and through many hard-fought battles, democratic participation was extended to all people, and women gradually began to seek positions of authority throughout the country. Justice Poritz herself was not always a lawyer; she was a teacher and mother, who often prioritized her family over her own career ambitions. Despite this, however, she eventually went to law school, and began working in Trenton for various state departments.

“It is possible to start late, you can go back,” she urged the audience, noting that she joined the legal field at a later point in life than most.

After moving up in state government, she became New Jersey’s first female Attorney General, a job which she believed helped her when she eventually went to the Supreme Court by teaching her about areas of the law where she had little prior experience.

It was also one of the first times she was a first-hand witness to the systemic sexism in government. It took her the duration of her tenure as Attorney General to gain the trust of the male-dominated NJ State Police as “a little woman.”

In 1996, the first (and only, to-date) female governor of New Jersey, Christine Todd Whitman, appointed Poritz to the state Supreme Court to replace Chief Justice Wilentz, whom she credits for helping to open the door for women in the court. In her position, the Chief Justice heard many cases of national importance.

“What’s remarkable about being on the NJ Supreme Court is that all of the great issues of the day come [for consideration] with very few exceptions…,” she said. “When I was there, some of the powerful issues of the day that came to our court had to do with things like [an openly gay] scoutmaster in the Boy Scouts… that went to the U.S. Supreme court and [Justice] Rehnquist overturned a decision I wrote.”

Whether the boy scouts could turn away a scoutmaster for being openly gay was just one example of the types of cases she heard, which touched on many state and federal constitutional questions.

Perhaps most important of all, though, was the progress she made for women in the judicial system. Poritz told the story of entering her chambers for the first time and seeing all the portraits of “black-robed men” looking down on her.

“I sat at my desk, and I heard them whispering, ‘What is that woman doing here?’”

Everywhere from her chambers to the court’s conference room had pictures of men, previous justices of the court, adorning the walls. In her time on the bench and afterward, however, more women were appointed and she hopes that trend continues into the future.

“Now I’m retired,” she said. “But a woman now hangs in that conference room.”

At the end, she emphasized the need of the younger generations to remain active in their desire to change society for the better.

“What’s important is the law and the way we react to it,” she said. “People say with their feet (referencing her and her colleagues refusing to meet at a club that did not admit women) what should be done correctly and fairly… You’re the people that are going to make the big changes.