Announcing the Frank J. Guarini School of Business in Recognition of a Historic $10 Million Gift 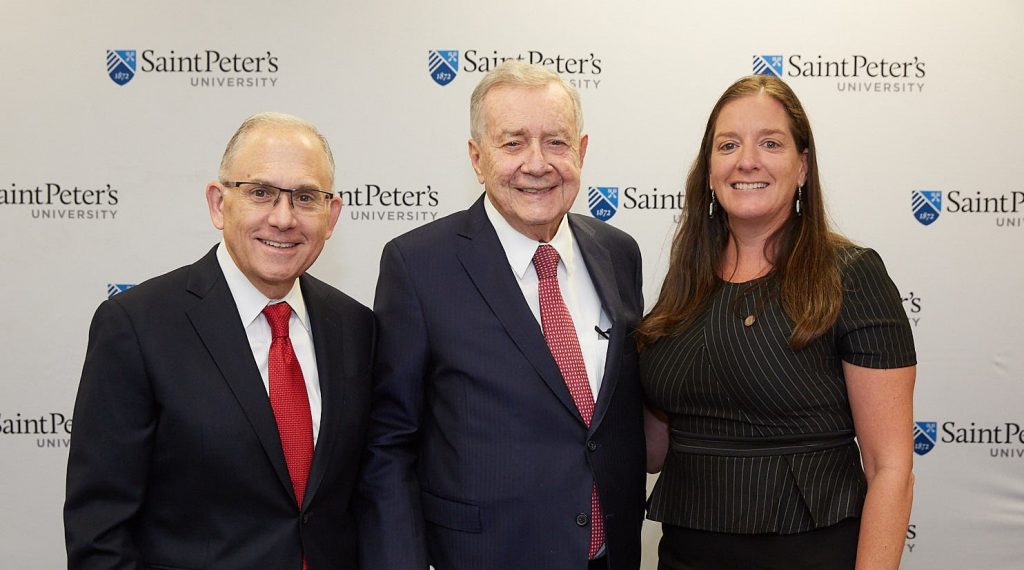 Jersey City, N.J. – September 18, 2019 – Saint Peter’s University today announced the naming of the University’s School of Business in recognition of a historic $10 million gift from former U.S. Congressman Frank J. Guarini H ’94. The gift will serve to transform and expand the current School of Business, significantly bolster business programs and establish new initiatives for the School.

“We are incredibly grateful for this gift from Congressman Guarini, which demonstrates his love for Saint Peter’s, his deep commitment to the value of education in our nation and his belief in the future of Jersey City,” said Eugene J. Cornacchia, Ph.D., president of Saint Peter’s University. “His character, contributions, integrity and Jesuit ethos mirror the very spirit of the University. The future path for the Frank J. Guarini School of Business will be inspired by Congressman Guarini’s lifelong entrepreneurial drive and commitment to social responsibility.”

Plans for the new Frank J. Guarini School of Business consist of physical and technological enhancements to the current School of Business including the construction of a state-of-the-art lab, innovation hubs, collaborative workspaces and a new entrance. Students will also be offered new opportunities through a student investment fund, lecture series, internship programs, a study abroad fund and increased investments in the School’s institutes and centers such as the Ignite Institute and the Center for Leadership Studies.

“I am deeply humbled to be leading the Frank J. Guarini School of Business,” said Mary Kate Naatus, Ph.D., KPMG dean of the School. “I commit to ensuring that our graduates will be prepared as ethical future business leaders with the knowledge and skill set for prominent careers in a variety of industries, poised to impact a business world that is increasingly interdisciplinary, and armed with a strong moral compass, committed to making a positive difference in their chosen professions and communities.”

Congressman Guarini, a Jersey City native who grew up across the street from the Saint Peter’s campus, has had a relationship with the University that spans many decades. He served on the University’s Board of Regents and received an honorary degree from Saint Peter’s in 1994 in recognition of his extraordinary public service. He has also been a longstanding supporter of the University. He established the Guarini Institute for Government and Leadership, which provides a non-partisan forum for discussion of key public policy issues. He also donated the president’s residence, Guarini House, and established the Caroline L. Guarini Living Room in the Mac Mahon Student Center as well as the Guarini Center for Community Memory in the Theresa and Edward O’Toole Library, which houses an extensive collection of his Congressional Papers and other special collections.

“Our business school will open the door to new experiences for tomorrow’s leaders,” said Congressman Guarini. “They have a bright and challenging future in this beautiful and complex world. Our young men and women will undoubtedly be benefitted by the outstanding education they receive here at Saint Peter’s.”

Congressman Guarini has had illustrious careers in a number of fields including politics, law, military and real estate. He served in World War II and was the recipient of the Navy Commendation Medal and three Battle Stars. He obtained his B.A. from Dartmouth College, his J.D. from New York University School of Law and studied at The Hague Academy of International Law in the Netherlands. His political career included two terms in the New Jersey State Senate and seven terms in the U.S. House of Representatives. After serving in Congress he was nominated and appointed as the U.S. Representative to the United Nations General Assembly. He has also been involved in major real estate development projects, particularly along the New Jersey Waterfront.

This gift comes during a time of significant increases in philanthropic activity at Saint Peter’s University. It is the second $10 million gift received within the past year as the University announced a $10 million gift in October 2018 from Joseph A. Panepinto, Esq. ’66, president and chief executive officer of Jersey City-based Panepinto Properties and a member of the Saint Peter’s Board of Trustees. Together, these gifts represent the two largest philanthropic contributions that Saint Peter’s has received in its nearly 150-year history.

“Saint Peter’s takes great pride in these recent gifts as well as the many other donors who are significantly increasing their commitment to the University of late,” said Dr. Cornacchia. “They serve as a bold endorsement of our vision for Saint Peter’s as a leading Jesuit university in the region. It is a testament to our commitment as an anchor institution in this community and beyond. It will be a catalyst for others to join us as we endeavor to take continued bold strides in the years to come.”