“We were educated to compete with everyone and anyone.” –Carol Bastek, Ed.D. ’70

In February 1965, at a board of trustees meeting, there was a unanimous vote to investigate the possibility of admitting “girls” into the Saint Peter’s University day session. Today, 50 years later, the University celebrates the anniversary of the admission of women to the day session. At that February board meeting, a decision was made to, “take 100 girls who would be the same quality of the best in the arts and sciences.” These women not only met the expectations to be as “the same quality” of their male counterparts, but exceeded them living successful lives on campus and far beyond. The first cohort of women to enter the University shattered expectations, reaped success and became true pioneers for women at Saint Peter’s. In fact, four years later in 1970, seven women graduated manga cum laude. A recent event celebrating the women pioneers of 1966 also marked the opening of an exhibit in The Theresa and Edward O’Toole Library, 1966-1970: When Women Changed Saint Peter’s Forever. A panel discussion accompanied the exhibit opening.

“Was it confluence of circumstances or conscious choice that brought us to Saint Peter’s?” Ann-Marie Nazzaro, Ph.D. ’70, panel moderator asked. Each woman answered that question differently, but a few things were certain. These women were smart, resilient and they graduated from Saint Peter’s with tools that helped them become “women for others.” Dr. Nazzaro, who has gone on to earn advanced degrees from the University of Michigan and the University of Pennsylvania, said, “Saint Peter’s gave me such a boost and a great base.“ Dr. Nazzaro and the other panelists shared their unique stories about their time at Saint Peter’s.

One panelist, Kathleen N. Monahan, Ph.D. ’70, who went from Saint Peter’s to get her master’s degree and her doctoral degree in English literature and who now teaches at the University, said she had only one female professor while she was in school. This prompted her to do some research on the topic. Since Saint Peter’s admitted women, the number in the student body grew rapidly. However, the number of females on faculty grew more slowly, hovering around 10 percent for many years.

Two women faculty members at the time spoke on the panel, Eugenia M. Palmegiano, Ph.D., J.D., professor emerita of history; and Eileen Poiani, Ph.D., professor emerita of mathematics and current special assistant to the president. Coming to Saint Peter’s in 1967, Dr. Poiani was the first woman professor in the math department. Recruited by the head of the history department, and entering with the first wave of women in the day session in ’66, Dr. Palmegiano, the first woman to earn a doctorate in history from Rutgers University, was one of the first women to teach at Saint Peter’s. The head of the history department at the time, Thaddeus Tuleja, Ph.D., recognized that now there would be women students, his department needed women professors.

“They were few in number, but they were smart, they embodied Jesuit ideals and they excelled above their peers,” Dr. Palmegiano said of her students.

Carol Bastek, Ed.D. ’70, who now gives back to the University through a scholarship, and for whom the honors house is named, said she could feel the confidence Saint Peter’s had in the fact that women would contribute to the academic reputation of the school. “Saint Peter’s had a vision to give women an education,” she said. “We were pioneers of that vision. We were stalwart and intrepid.”

Karen Gutch ’68 agrees with her. Gutch’s experience at Saint Peter’s was a bit different from the other women because she transferred from the night school. She already had credits and started the day school as an upperclass member, meaning that she took classes with mostly, if not all, men. She said she was determined; she always sat in the front, eager to learn even if she was the only female in the class. “I would leave class and run to the library to do research. I paid my tuition and nothing was stopping me,” Gutch said. Although it was hard being the only female in class some days, Gutch persevered, as did Michele Cahill ’70.

Cahill said she faced some adversity while attending the University. She was tripped, she was made fun of, she was harassed at times, but none of that stopped her. She said she and the other women would congregate in the Women’s Lounge in McDermott Hall. This lounge was where they formed bonds and lifelong friendships that have lasted until this day. The women of the University united here and provided each other a support system.

The exhibit, 1966-1970: When Women Changed Saint Peter’s Forever curated by Librarian Ilona MacNamara is on display in The Theresa and Edward O’Toole Library and includes images and documents from the University Archives. Click here for a slide show and more information about the exhibit.

On September 24, 2016, Saint Peter’s University celebrated the 50th anniversary of women being admitted to the traditional day session. Click here to see pictures from the event. 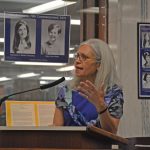 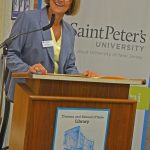 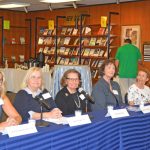 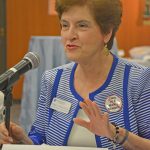 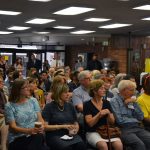