This semester the Guarini Institute for Government and Leadership hosted the event Keeping American Elections Honest and Fair. The event featured Hudson County Clerk E. Junior Maldonado; Michael Harper, clerk to the Hudson County Board of Elections; and John Brzozowski, Hudson County superintendent of elections, who came to campus to engage students with the election process. 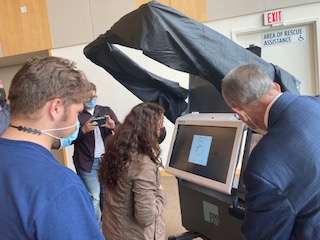 Attendees of the event had the chance to explore the latest voting technologies including a new digital voting booth and a new electronic poll book that enables voters to sign-in digitally. In addition to seeing these innovations firsthand, students also were informed how they could apply for paid positions to work during the November elections.

A paid position is a draw for any college student interested in making some cash to help cover course fees or book costs; however the Saint Peter’s students who became poll workers took away a great deal of knowledge and experience from their participation.

Camila Hernandez ’23 never considered becoming a poll worker until she learned more about it from the Guarini Institute for Government and Leadership. “I was unsure about it at first; however I was truly interested in learning more about how the voting process worked,” she said.

Lissette Vasquez ’22, a criminal justice major, was inspired to work at the polls because she was intrigued by the introduction of early voting. “I wanted to understand how the early voting process would work given that people were doubtful about it. Additionally, any opportunity is a good one to make connections and learn something new,” she said. 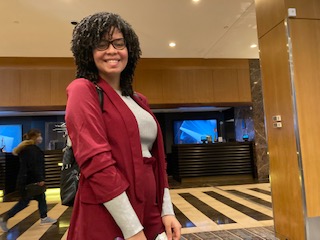 Vasquez ended up working at an early voting day as well as on Election Day. She facilitated the distribution of voter satisfaction surveys, which were designed to determine whether or not people liked early voting and to gauge feedback on the new voting technologies. In her two days of work she was able to help to collect approximately 300 surveys for the Board of Elections!

Their experience as poll workers also inspired the Saint Peter’s students to think about how the voting process will evolve in the future. While conducting the voter surveys Vasquez heard many voters mention the idea of online voting. “I personally think that online voting would make the process less rigorous, be safe for people to do and would also help us save the planet. It is a win-win-win,” she said.

The event was considered to be a success by the Institute, which aims to provide programming throughout the academic year to promote critical thinking, debate and careers in public service. Ginger Gold Schnitzer, J.D., executive director of the Institute and director of the master’s program in public administration at the University, has had a long career in public service, which also began for her as a poll worker.

“I started working at the polls when I was 18 years old,” said Schnitzer. “At the time, I could not believe they trusted a teenager to help voters exercise such an important right. Now that I think about it, it’s brilliant. Who else should we trust to help facilitate our democratic processes? After all, the future of our republic is in their hands. I am so proud of all of our students who took the time to engage in this important work.”