By Loretta Graceffo ’21, news editor of The Pauw Wow 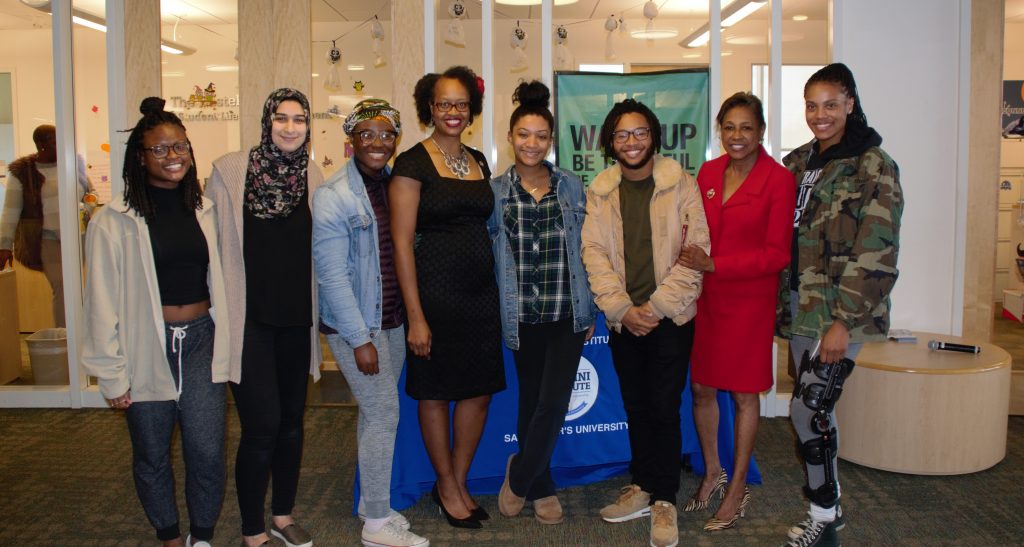 Last December, a white referee made headlines after forcing a black student wrestler to cut his dreadlocks before a match. The incident was captured on tape— and quickly caught the eye of Angela McKnight, a member of the New Jersey General Assembly.

As soon as she saw the footage, McKnight knew she had to do something.

“I wanted to act. I wanted [that student] to feel that his hair was cut, but not in vain,” she said. “Because of him, I want there to be a law. So no one will ever have to experience what he experienced.”

Today, Assemblywoman McKnight has teamed up with New Jersey Senator Sandra Cunningham to draft the CROWN Act, a piece of legislation that, if passed, would ban hair discrimination in the state of New Jersey.

McKnight and Cunningham visited Saint Peter’s on Thursday, October 17 to lead a discussion about the CROWN Act and the role the law could have in ending discrimination in schools and the workplace.

“It’s time to stand up,” said Cunningham. “This is something that is affecting a lot of people, but a lot of people aren’t fighting it. They’re just accepting it…Sometimes you have to be the first.”

CROWN is an acronym for “Creating a Respectful and Open Workplace for Natural Hair.” The act is backed by Dove and composed by the CROWN coalition, which consists of organizations like the National Urban League, the Western Center on Law and Poverty and Color of Change.

Currently, the CROWN Act has been signed into law in the states of California and New York, protecting people of color from being unfairly impacted by corporate grooming policies that target hairstyles like bantu knots, braids and twists.

During the presentation, students shared their own stories of being singled out due to their hair — from being pressured to cut their dreadlocks for an internship, to constantly being accosted by people who want to touch their curls.

McKnight’s advice to young people facing hair discrimination was simple: “You’re bigger than them,” she said. “Don’t let anyone define you. And always remember you are unique, and no one should steal your joy. No one.”

Correspondents from NJTV News and WNYC also attended the event and interviewed students in regards to the topic. Click here to watch the segment on NJTV News.