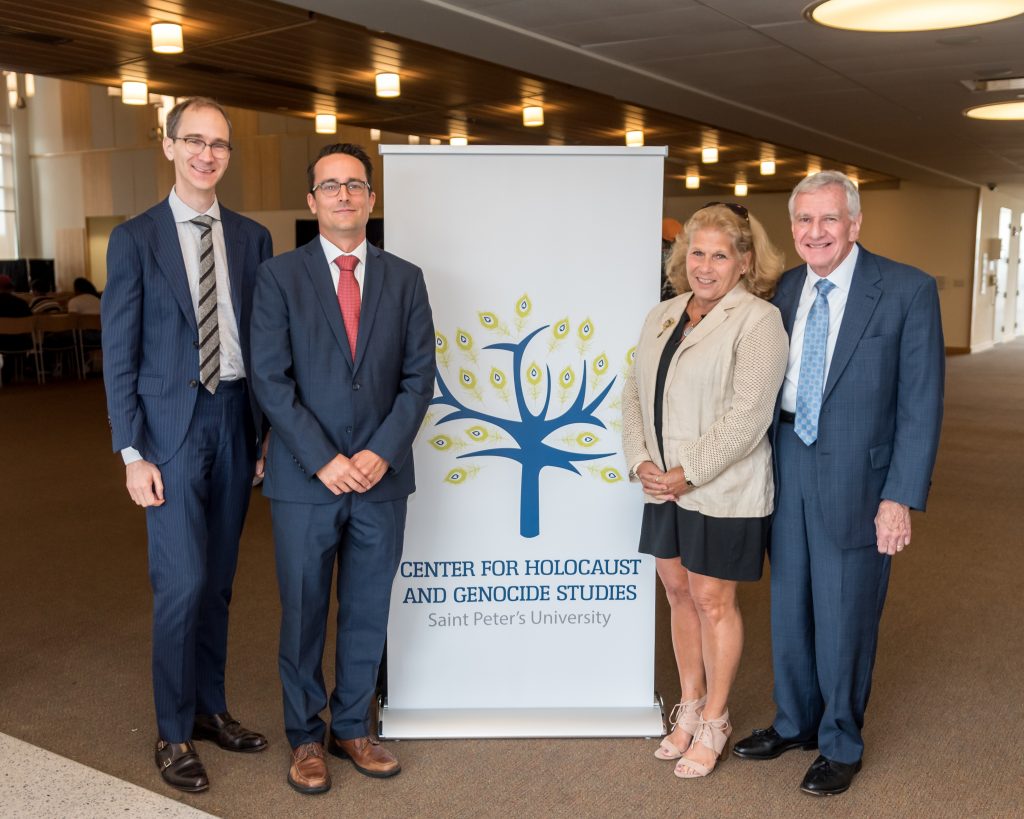 On a significant historical day, Saint Peter’s launched the University’s Center for Holocaust and Genocide Studies. David Gerlach, Ph.D., director of the Center, selected October 7, 2019 for the opening celebration as it marks the 75th anniversary of the most ambitious uprising at Auschwitz-Birkenau, the most infamous Nazi concentration, forced labor and extermination camp.

With formal designation from the New Jersey Commission on Holocaust Education, The Center for Holocaust and Genocide Studies at Saint Peter’s was designed to educate University students and the wider community about the history of the Holocaust and other genocides. This commitment stands on the principle that understanding the dynamics of genocide can be best accomplished by learning from past experience. The Center strives to highlight contemporary developments that foster discrimination, intolerance and violence in order to aid targeted groups and take the necessary steps to prevent future genocides.

“The goal of any center like this is to raise awareness about genocide in order to help make sure that it never happens again, which seems like a simple enough mission, but I would suggest that there is much more to it,” said Dr. Gerlach. “Genocides do not happen all of a sudden or by accident. They are built upon histories of discrimination and ideologies of intolerance. The task of this Center is also to educate and to draw awareness to past and present forms of discrimination, so that we do not sit idly by and allow such hatred to devour our society.”

“One of the goals is to promote tolerance through the ability to accept others regardless of their ethnic or religious identity. The Center for Holocaust and Genocide Studies at Saint Peter’s University is well-situated for this task. We are a diverse university in a diverse city.  And I believe that this diversity is a source of strength from which we can build this tolerance,” explained Dr. Gerlach. 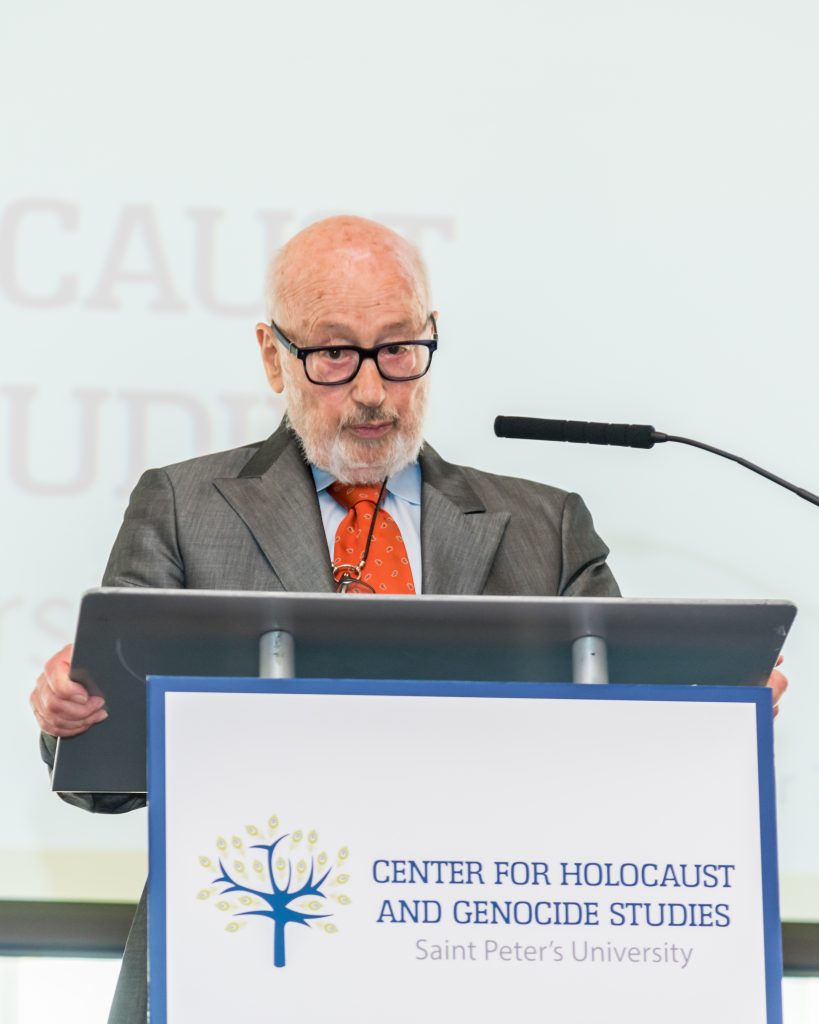 Jersey City Mayor Steven Fulop H ’14 helped to kick-off the launch of the Center, the first of its kind in Hudson County, sharing how his family was directly impacted by the Holocaust. In his remarks, Mayor Fulop shared his moving story, which revealed that 35 members of his immediate family were taken to Auschwitz and only seven survived. One of the survivors was his grandmother who eventually made her way to America in search of new opportunities.

“Today we have a Jesuit institution taking a leadership role in Hudson County in Holocaust studies,” said Mayor Fulop. “I think that says something not only about Saint Peter’s, but also about my grandparents’ belief in this country on who we are and what we are about.”

The opening celebration included a keynote address from Holocaust survivor Felix Pflaster. Pflaster was born on February 20, 1932 in Jezewo, Poland. His parents immigrated to France when he was approximately eight months old. He grew up in the small town of Montceau-les-Mines. In July of 1942, Pflaster’s mother was deported to Auschwitz. His father joined the French Resistance. Pflaster, along with his brother and sister, survived the Holocaust by a combination of being placed in orphanages, being taken in by French families and being hidden in places including a Catholic monastery. After the war, Pflaster and his brother and sister were reunited with their father.

The panel was moderated by Dr. Gerlach and included Larry Glaser, executive director of the New Jersey Commission on Holocaust Education; Paul Hanebrink, Ph.D., of the Department of History at Rutgers University; and Jane Denny, professor at Stockton University and former director of education at Brookdale’s Center for Holocaust, Human Rights & Genocide Education. 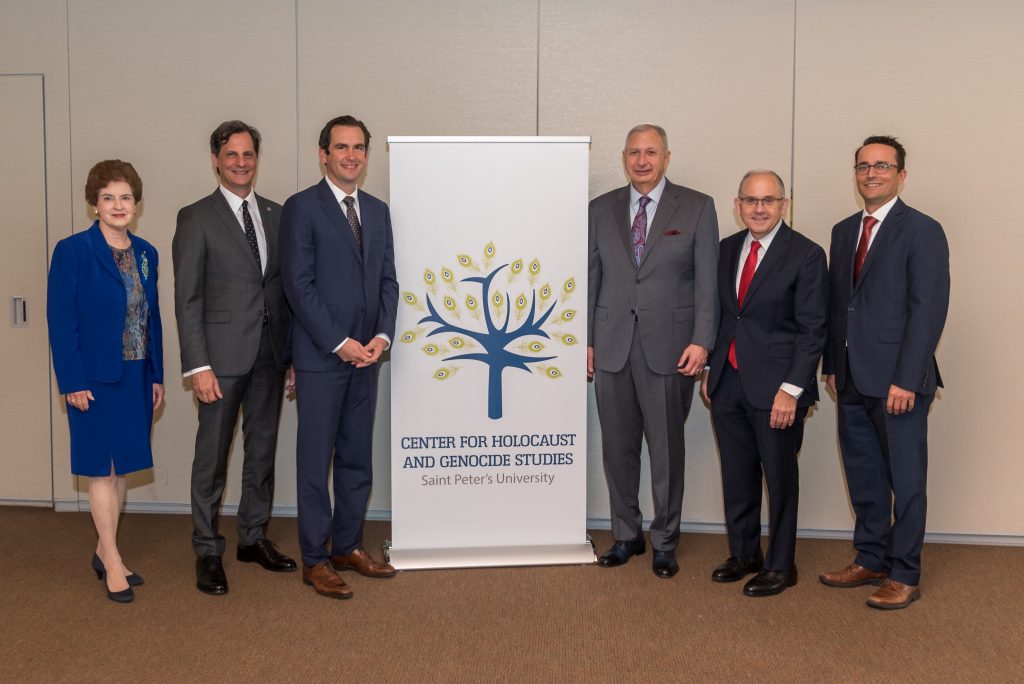