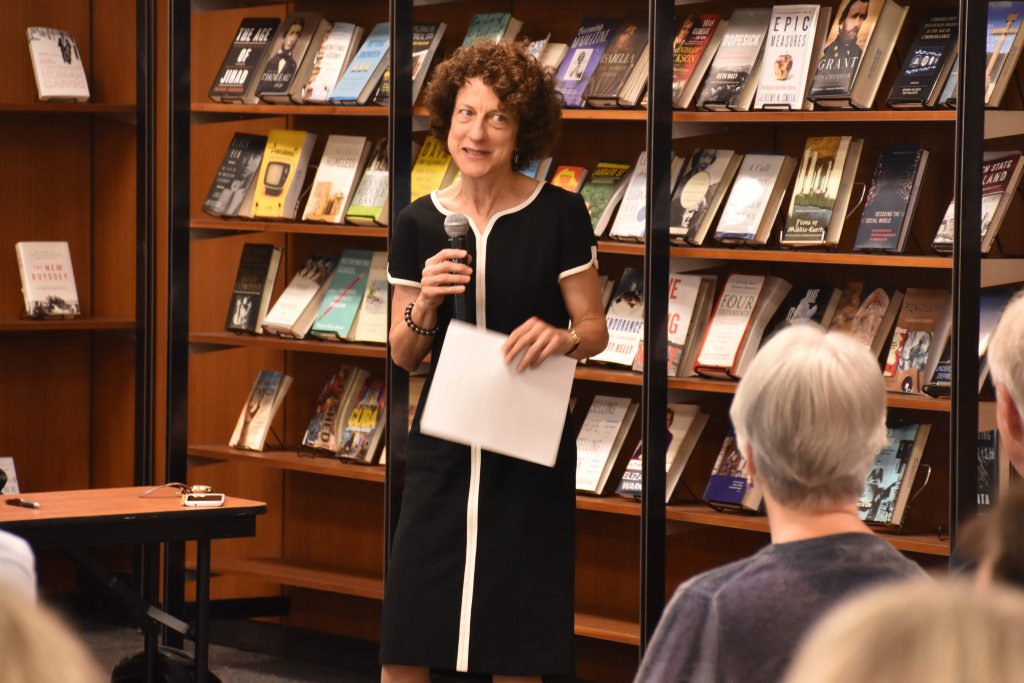 The Theresa and Edward O’Toole Library Lecture Series: Transforming the Region’s Transportation System featured a panel discussion on the region’s transportation system led by Philip Plotch, Ph.D., assistant professor of political science and director of the Master of Public Administration Program. In conjunction with the presentation, a display consisting of New York City related books donated to the library by Peter Derrick, Ph.D., transit historian, was on exhibit. The Guarini Institute for Government and Leadership, the public administration program and the Theresa and Edward O’Toole Library sponsored the event.

The panelists praised the recent books Dr. Derrick donated from his personal collection. Dr. Derrick is a transit historian and former MTA official and the author of Tunneling to the Future: The Story of the Great Subway Expansion That Saved New York, as well as numerous articles about mass transit. 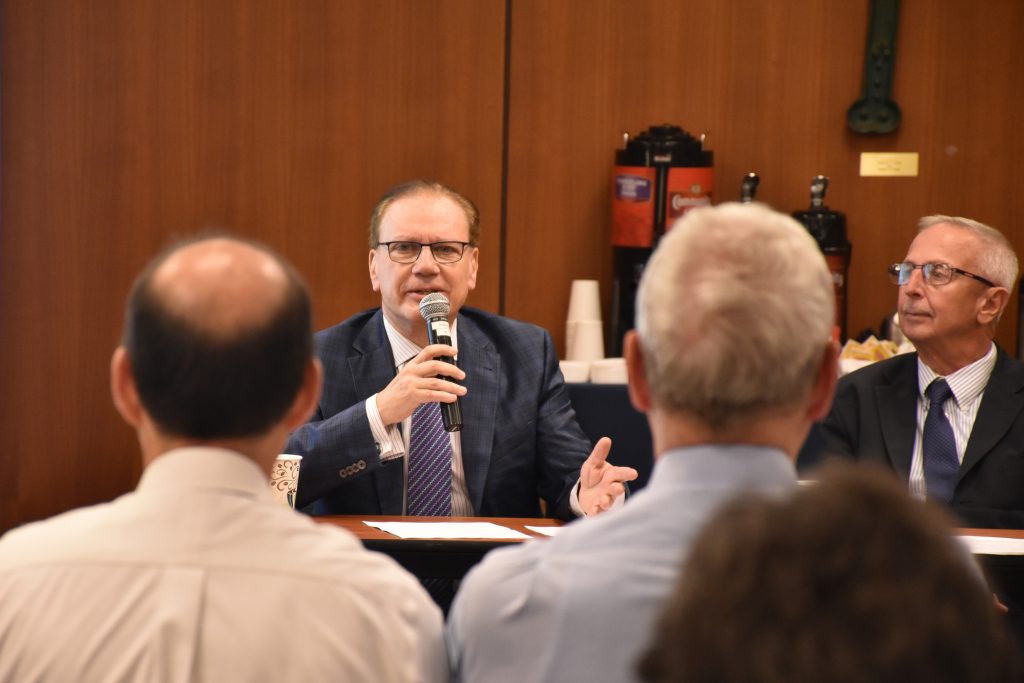 Janice Molnar, Dr. Derrick’s wife, opened the program by sharing her experience getting lost on New York City subways and searching for non-existent transfer points, recalling a time when the subway system was not reliable or safe. Dr. Derrick amassed a collection of books on transit due to his storied past with regional transit.

“We reached a point where it was not only time to move, but it was time to downsize, a daunting task,” Molnar said.

They were left with boxes of books but Dr. Plotch worked with Daisy DeCoster, director of the library, to bring them to the Theresa and Edward O’Toole Library.

During the panel discussion, Dr. Plotch narrated the perils of the MTA in the early ’80s and the lessons to be learned from the public transportation crisis 10 years ago. The subway was in a state of detritus; one third of subway cars pulling into the stations had broken doors and lighting problems and subway cars were catching fire several times per day. There was no plan to fix the problems until Richard Ravitch, former head of the MTA, came into office and proposed a $14 billion capital program, which was more money than NYC was spending on many other initiatives combined.

“Ravitch used the media,” said Dr. Plotch. “Whenever there is a subway problem today and the reporter asks the MTA what is going on, they will try to minimize the problem and talk about how things are going to get better. Ravitch did the opposite, he admitted the MTA services were awful and they were going to get worse. All the news stories and phone calls put intense public pressure on state legislators and the governors to do something.”

Ravitch was finally able to get funding. Over a 10-year process, the subway cars were new or overhauled, the graffiti was gone and the subways were safe to ride.

“The steady improvement in system reliability began to falter in the first decade of the new century. That degradation continues and accelerated and in June of last year, Governor Cuomo declared a state of emergency in the subways. It turns out that the rebuilding program begun in 1982 was nowhere near enough,” said Gaul. 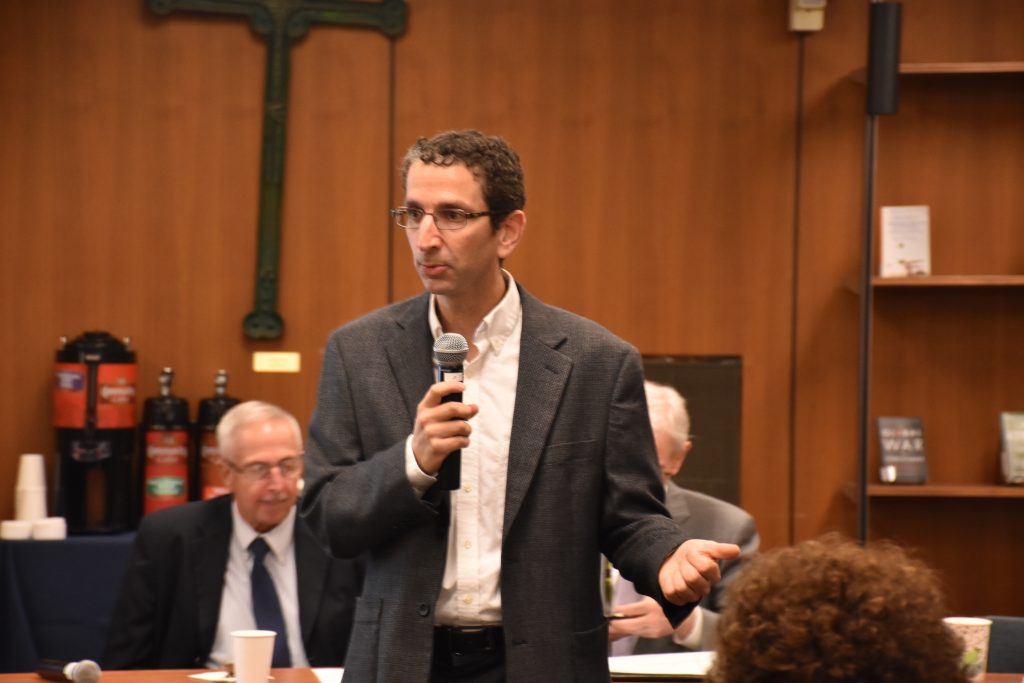 Now, MTA officials are making the argument for more funding to return the system to a “state of good repair.”

“I think the most important need is not just obtaining the resources necessary to restore a reliable system, but to put in place a process that ensures the ongoing funding streams necessary to not only to maintain the current system, but to modernize it, update the technology it uses to make it more efficient and user friendly, to increase its capacity to handle current and future passenger demand and to expand it to areas not currently served,” said Gaul.

Wheeler’s perspective on the future of local transit added depth to the conversation of how to improve the subway system as many of the most notable subway and Long Island Rail Road projects recently completed were based on planning studies overseen by Wheeler.

“Who could have imagined that we would have too many riders in the subway system,” Wheeler said and provided an overview of who is riding the subway and why ridership is booming. “Millennials are users and not owners and renters and not buyers. And the impacts of this are going to be extraordinary in society.”

Wheeler narrated that the millennials prefer transit and they want transit that is reliable and tech friendly. In addition, “Work is not work anymore; work is WeWork.” Working is moving toward a gig-based society instead of a 9-5 structure, this means that people are traveling on the subway at all times of day (not just “rush hour”). 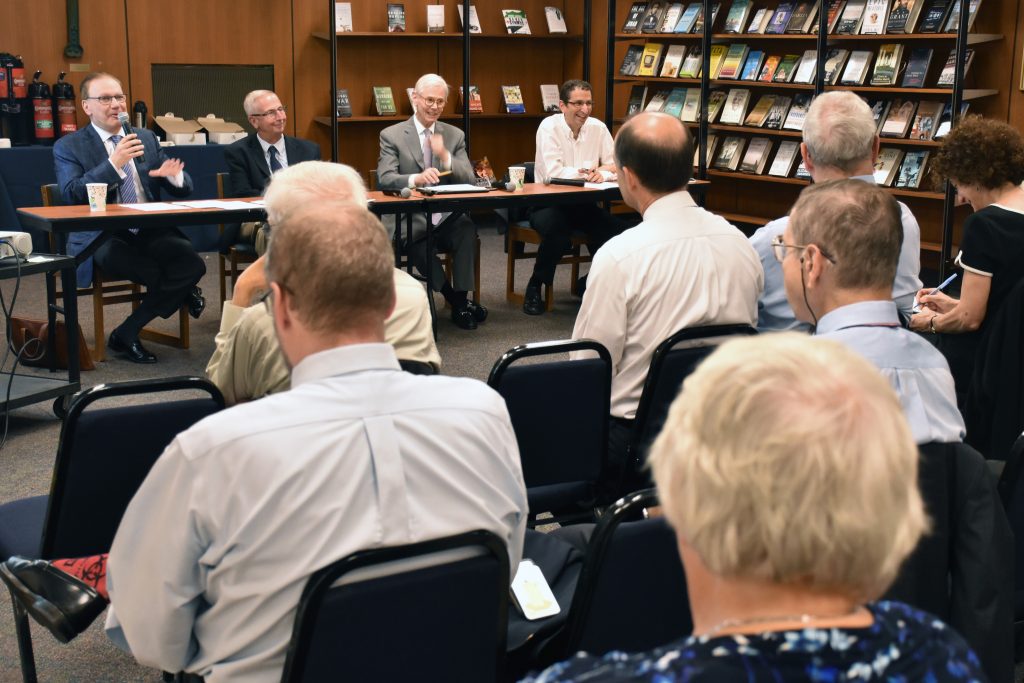