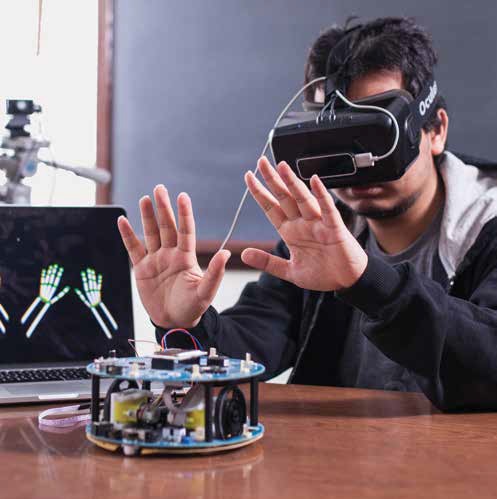 “Saint Peter’s went out of its way to make things possible for me.”

Prajjwol Gautam ’15 has been looking for the next big Internet development for a long time. He believes he’s found it with the technological advancements in virtual reality (VR). A computer science and mathematics major from Nepal, Gautam’s honors thesis, “Immersive Computing to Interact With Everyday Objects,” examined what it would take to move VR beyond entertainment and gaming to being a ubiquitous part of daily life.

Growing up in Nepal, Gautam was fascinated by computers. The Class of 2015 co-valedictorian began building websites in fifth grade and liked the fact that he could create applications other people could see and appreciate. Virtual reality, according to Gautam, is the ultimate form of communication. “It has the capability to engage the senses of the user in a way that a traditional screen or audio speaker cannot, by immersing all of one’s senses in computer generated stimuli,” he said.

Gautam predicts unlimited potential when VR advances to fully replicate the five human senses in an immersive environment. “I can see economies and schools developing in virtual reality. I cannot attend a class in Stanford one day and come back to Jersey City the next day, but in virtual reality, people will be able to do that,” he noted. Other advancements, like the development of artificial smell and touch, have a direct application to safely train firefighters, medical clinicians and even bomb squads.

As a student, Gautam worked part time at Indicative, Inc., in New York, a software firm developing the next generation of web and mobile analytics for business. He was hired in May as a full-time software engineer, and envisions a future in which he will contribute to the development of virtual reality technology.

“My goal would be to create or to bring VR along to be of use in your day-to-day activities,” he said. “One device that can be used anywhere and everywhere.”

He said the cura personalis he received at Saint Peter’s has been an incredible blessing. “Saint Peter’s went out of its way to make things possible for me. When I first came here, I was afraid to ask anyone for a favor because, I thought, ‘Why would someone go out of their way for me?’ I now see that things are possible. You just have to show that you want it badly enough and things will happen for you. Saint Peter’s made me think, ‘things are possible; just come and talk to us.’”

Read More
We use cookies to ensure you get the best experience. By continuing to use this site, you consent to the use of cookies in accordance with our Privacy Policy.Ok