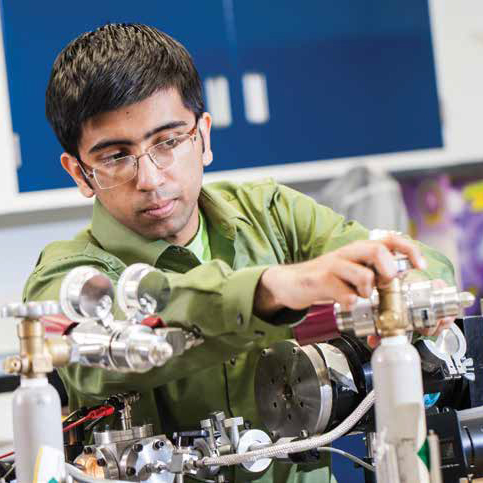 Pushing the Envelope of Discovery

“Science is like peeling an onion,” said Prajwal Niraula ’15. “You never know what is going to come next.” For Niraula, a physics and mathematics major from Nepal and Class of 2015 co-valedictorian, research opportunities at Saint Peter’s University led to significant discoveries in the emerging field of microsplasma.

As an undergraduate, Niraula worked closely with Associate Professor of Mathematics and Physics Wei-Dong Zhu, Ph.D., in the Center for Microplasma Science and Technology (CMST) within the University’s Department of Applied Science and Technology. The duo confirmed and built upon previously established models related to the self-organization of microplasma, the fourth state of matter, with potential applications to improve water purification, medical treatment and even television and screen displays.

In 2014, Dr. Zhu and Niraula co-authored a paper in Plasma Source Science and Technology, an international journal dedicated to non-fusion aspects of plasma science, that detailed their method and observed two new self-organized patterns of microplasma. Their protocol and findings are an essential road map for researchers to observe and design more efficient experiments in the future.

With funding from the Independent College Fund of New Jersey and under the mentorship of Dr. Zhu, Niraula made another breakthrough this year. His honors thesis, “Experimentation and Modeling of Self Organization in Cathode Boundary Layer Discharge in Noble Gas,” was the first successful attempt to use krypton to observe the same pattern and structure of microplasma (previous experiments used the noble gas xenon).

Pushing the envelope of discovery has been extremely gratifying, Niraula said. “When I observed the structure of microplasma in krypton gas, I was really excited because it had never been done before. Even Dr. Zhu was excited. He said to me, ‘You are the first person who saw this.’”

The finding has already influenced research at the CMST, inspiring the testing of multiple gases to create established patterns of microsplasma self organization. “In the scheme of things, microplasma is relatively new,” said Niraula. “There’s not a whole lot of direct application from our studies; it’s about understanding the plasma. We know we’re going in the right direction and the combination of gases is interesting. Maybe it brings us closer, or has the potential for a more direct application.”

After graduation from Saint Peter’s, Niraula will spend six months to a year working on the Atacama Cosmology Telescope in Chilé, a scientific collaboration led by Princeton University that is observing and measuring distant galaxies in the universe.

A student researcher in the Department of Physics at Princeton University for the past three years, Niraula assisted with the design and testing of various components used in the telescope. He is excited to be onsite with the study, gaining hands-on experience and a broader understanding of astrophysics and cosmology, which he plans to study in graduate school.

Physics, he believes, makes us better. “There is an intrinsic value to understanding the origins of the universe and how it evolved to its current state that is simply exciting,” he said. “You want to explore more. Physics, or any other science, is part of who we are and who we want to be.”